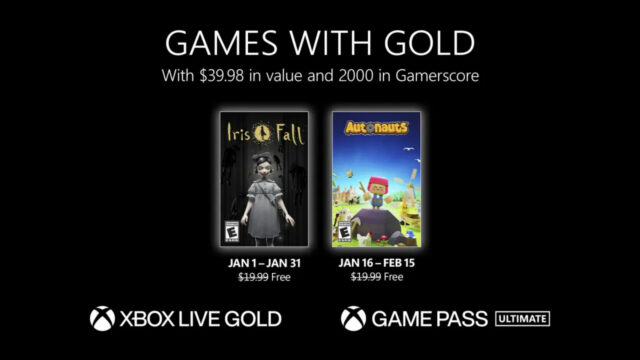 2022 is coming to an end so Xbox is looking ahead to January with a couple of announced Games with Gold titles. To kick things off for January 2023, Xbox is offering Iris Fall and Autonauts to Xbox Live Gold and Xbox Game Pass Ultimate subscribers.

For the uninitiated, Xbox Games With Gold is a monthly perk for having an active Xbox Live Gold and Xbox Game Pass Ultimate subscription. Each month, Xbox offers a couple of games to redeem for free and keep for as long as a subscription is enabled. Previously, Games With Gold included older Xbox 360 and original Xbox games. However, the company stopped including these within Xbox Live Gold starting October 2022. That said, this month’s offering includes a value of $39.98 with up to 2,000 Gamerscore available via Achievements.

Enter the dreamlike, stunningly designed world of puzzles and adventure. Play as young Iris who follows a mysterious black cat into a labyrinthian world of light and dark. The deeper Iris delves, the more she will realize that everything holds some kind of connection to her. Clever mechanics and challenging puzzles combined with a unique monochrome look and spectacular soundtrack all help lead to a wonderful adventure.

The world is yours for the building! Find uninhabited planets and transform them. Starting with the absolute basics of harvesting sticks and stones, you’ll begin your foundation. Eventually, you can move up to building workerbots, who in turn can help you build more after you hone their artificial intelligence. Teach them to fish, harvest, cook, tailor, and more. Before you know it, you can create Folk who will need your assistance to survive. This is an adorably designed sim game that is open-ended and provides tons of fun challenges for you to master. Set the world in motion through automation.

Xbox Live Gold is available in Canada, starting at $29.99 for a 3-month subscription. Xbox Game Pass Ultimate, on the other hand, is available for $16.99 per month.