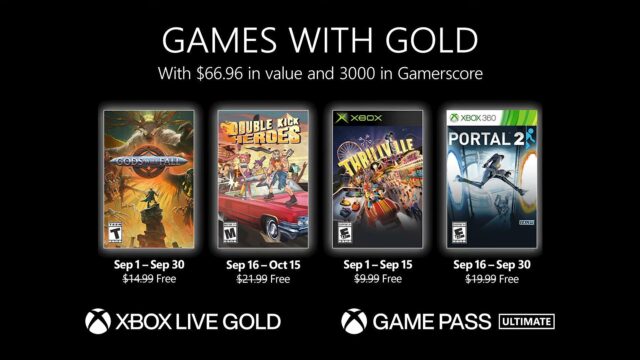 Microsoft has unveiled the Games With Gold slate for September 2022. Kicking off the month is a new assortment of games being offered for free to those subscribed to either Xbox Live Gold or Xbox Game Pass Ultimate.

Each month, Xbox Live Gold members gain access to four titles as part of the program. Xbox Game Pass Ultimate members also have access to the same perks. This coming month, the offering of Games With Gold titles includes Gods Will Fall, Double Kick Heroes, Thrillville, and Portal 2. Even if you have no intention of playing these games this month, it’s always recommended you redeem them as access will remain as long as your subscription is active.

What’s noteworthy about this month is September 2022 is the final month that Microsoft is offering Xbox 360 titles. So, Portal 2 is the final Xbox 360 game available via Games With Gold. Moving forward, Microsoft will continue to offer Xbox One titles

Take up the battle against the very deities themselves in this brutal action & adventure epic. The gods have lorded over the world for millennia ruling with a cruel iron fist that demands unquestioning fealty. You and your fellow Celtic warriors are the very last chance for humanity. Grab your mace, test your spear, and sharpen your axe to battle horrific beasts and minions that dwell in hellish lands of each god. Your decisions can make you a legend or you can be dust.

The pure power of Metal compels you! Travel the post-apocalyptic freeways battling zombies and militia in your tricked-out Cadillac – the Gundillac. It’s a wild game that combos a shoot ‘em up with a rhythm game. Bang your head with your band thru 30 levels of madness and heavy, heavy metal.

Summer doesn’t have to ever end when you get to build your amusement park. You get to do everything from design roller coasters to go-carts, play mini-golf on your own courses, and join friends for party games. Make sure to check in with the guests to ensure they are loving your theme park as much as you are, and make adjustments to keep them happy! It’s non-stop fun in the virtual sun!

One of the all-time classics is available for you to teleport into problem-solving mode. Use your wits over weapons in this sci-fi puzzler. In addition to portals, use tractor beams, lasers, light bridges, and more. With humorous new characters voiced by the likes of Stephen Merchant and J.K. Simmons, the story and humour are as much a joy as the problem-solving. Play single-player or co-op to start bending the rules of physics.