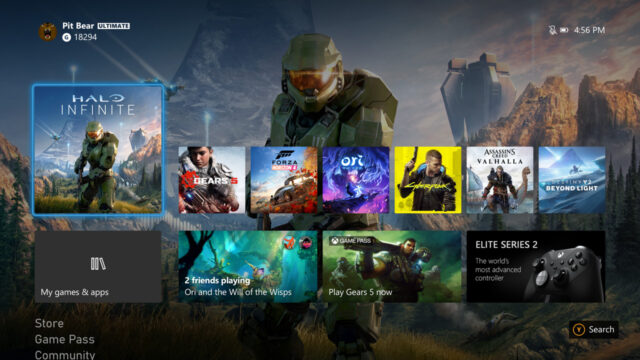 Microsoft has confirmed that the Xbox Series X dashboard will be receiving a resolution upgrade. Xbox Insiders enrolled in the Alpha and Alpha Skip-Ahead rings will be the first to test the new 4K dashboard prior to a mass rollout.

In a blog post, the Xbox testing team gave a rundown of what is included in the latest Alpha Skip-Ahead build. Most noteworthy was the bump in resolution for the Xbox Series X dashboard. Prior to the bump, the Xbox Series X UI was rendered in 1080p. As testing commences, the UI for Xbox Series X’s ‘Home,’ ‘Guide,’ and ‘My games & apps’ will greatly be improved for those playing on 4K displays.

This change means Home, Guide, and other areas of the UI will be displayed in a higher native resolution for increased sharpness and text readability,” Microsoft wrote on their blog post.

It’s worth stating that in the blog post, Microsoft has not made any mention of a potential upgrade to the Xbox Series S dashboard. Perhaps Microsoft is merely testing the 4K UI upgrade on Xbox Series X first prior to concentrating on its sister console. Although the Xbox Series S targets 1440p, it can upscale the display to 4K. It is possible that the console could see a similar treatment sometime in the future.

News of the 4K dashboard comes soon after Microsoft announced Insiders will be able to test the console’s new Night Mode, which dims the LED lights on the Xbox Wireless Controller, and the Xbox logo on their console. Additionally, it will dim and filter the screen brightness during those late-night sessions.

Spotify is launching a new Home experience that includes feeds for both Music and Podcasts & Shows, making it easier for listeners to scroll through the type of content they’re looking for. The updated Spotify home screen will make the experience more personalized while allowing users to dig even deeper into their recommendations. In the...
Usman Qureshi
2 hours ago