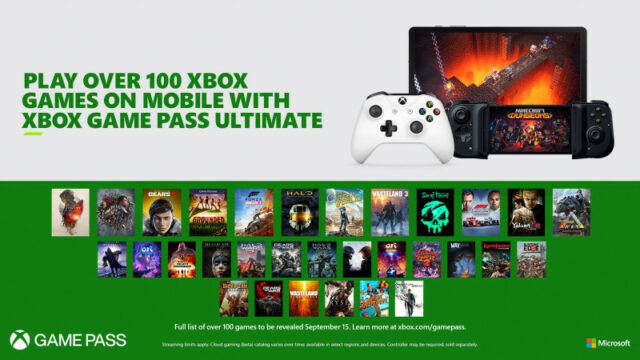 Ahead of its official launch on September 15th, Microsoft has opened early beta access to its cloud gaming service (formally known as Project xCloud) to Xbox Game Pass Ultimate subscribers.

A new version of the Xbox Game Pass app has been launched on Android devices. In preparations for the official launch in September, Microsoft has opened up a beta phase for Xbox Game Pass Ultimate subscribers to download the new app and test its game streaming service, according to The Verge.

A Microsoft spokesperson told The Verge that the company is opening the beta in order to provide “a smooth transition of the cloud gaming experience to the Xbox Game Pass app on Android”.

For the uninitiated, Microsoft’s game streaming feature enables users in supported regions to access and play more than 100 games from the cloud on their mobile devices. The new Xbox Game Pass app can be found on the Google Play Store. Participating players will have to have an Xbox Game Pass Ultimate subscription in order to gain access to the beta.

While the full lineup of games has more than 100 games, including Halo: Master Chief Collection, Grounded, Gears 5, and Hellblade: Senua’s Sacrifice, there will be a limited offering during the beta phase. Despite the beta’s existence, the Project xCloud Preview will be discontinued on September 11th to transition users over for the general launch.

At this current time, Microsoft’s cloud gaming service will only be supported on Android devices. Microsoft ended its support of the TestFlight version of the Project xCloud Preview app on iOS devices early. Statements from both Apple and Microsoft were made last week, dissecting why Apple’s App Store policies made it difficult for Microsoft to move forward with launching its service on Apple devices.

Christmas is just around the corner, and with all the sweet Black Friday deals out there at the moment, there's no better time to get your holiday shopping done. Here are our top picks for tech gifts this holiday season: Apple Gift Ideas Apple's latest flagship smartphone series, the iPhone 14 Pro, absolutely has to...
iPhoneinCanada.ca
16 mins ago

Here are the latest Canadian cellphone plan and device deals, plus other promos from wireless carriers such as Rogers, Telus and Bell, from our partner PlanHub. As always, the promos may change at the last minute, but here they are as of Wednesday, November 23, 2022, which include numerous Black Friday and Cyber Monday deals. Check them […]
IIC Deals
59 mins ago

Cirrus Logic, one of Apple's suppliers, may have just confirmed solid-state Power and Volume buttons with haptic feedback for next-year iPhone 15 Pro models — reports MacRumors. The Texas-based semiconductor manufacturer told shareholders earlier this month that it continues to "engage with a strategic customer" and hopes to bring "a new HPMS component to market...
Nehal Malik
1 hour ago