Yesterday Rory posted an article about an application to allow file transfer between your iPhone and Mac/PC via USB called DiskAid. For those of you using Windows machines, there is another software called Xilisoft iPhone, which several of my associates use regularly and swear by it.

The interesting thing about Xilisoft iPhone is that aside from giving you the ability to transfer files to and from your iPhone just like an external disk is that it manages your native files via iTunes 8.2.

The full version is $20, but they offer a free download. I’m not sure what the restrictions are but if you’re on a Windows machine, I’d give it a shot. 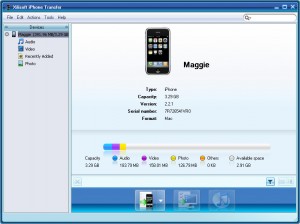