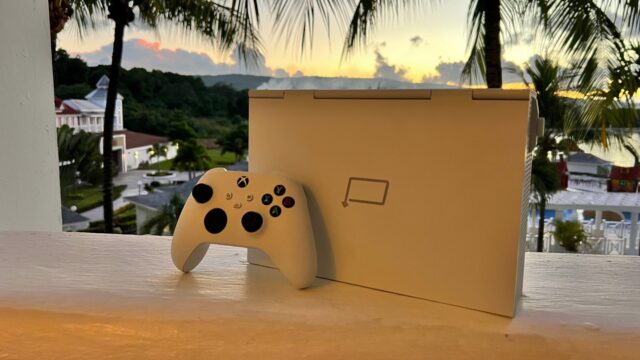 Over the last two years, I’ve adored Microsoft’s Xbox Series S. As it was first positioned, the Series S is the indisputable entryway into the current generation of gaming. Not only does it come with a more affordable price tag but it’s compact and very portable. When UPspec Gaming’s xScreen came into my purview, I knew I had to give this portable screen a whirl for how it marries so well with the console.

Since getting out of the eye of the storm that was COVID-19, travel possibilities have become more common. Both for business and personal, I’ve had a few chances to travel once again which means packing up the Xbox Series S to take with me. In comes the xScreen which I recently took with me on a week-long vacation to Jamaica.

The xScreen is very akin to the portable DVD players we all used to have. The foldable screen fixes directly to the Xbox Series S and its HDMI port. Doing so enables users to play their digital games as long as a power source is available as well as Wi-Fi. The xScreen does come with a premium price tag of $249.99 USD (around $339.78 CAD). Though, if you’re already deep in the Xbox ecosystem and plan to make the Series S a more regular travel companion, the xScreen is a supplemental device worth considering.

Out of the box

UPspec Gaming’s xScreen is currently available in one colour option. You can order the screen in a White model, pairing perfectly with the Xbox Series S. It offers a nice synergy. The screen itself is 11.6-inches with bezels and housing matching the size of the Series S console. When closed, the xScreen is flush with the hardware and only extends the height of the unit by an inch or so.

The xScreen offers an IPS display, capable of supporting 1080p 60Hz. While this does fall short of the 1440p the Series S is capable of, playing on an 11.6-inch screen, you hardly notice the lowered visual quality. It’s an understandable trade-off given the size and portability of the unit. 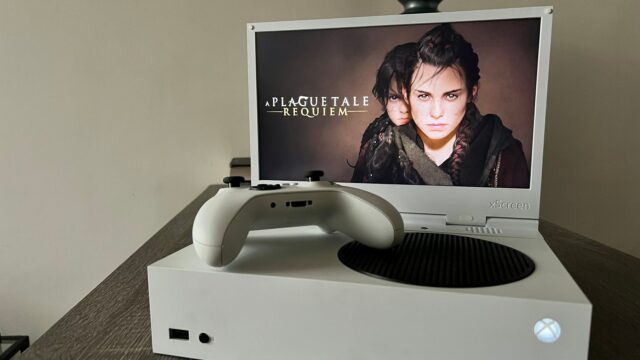 The xScreen also has two built-in stereo speakers. I’m not an advocate for using speaking in public spaces, like an airport. Though, it’s a great feature to have in a hotel room if you don’t want to bring a headset with you. On-board controls for volume and brightness are also included so you can tweak these easily through the screen’s menu system. The xScreen also features an HDMI-CEC power-off function on top of the standard power button. This shuts off the screen when the display is folded close to prevent overheating. 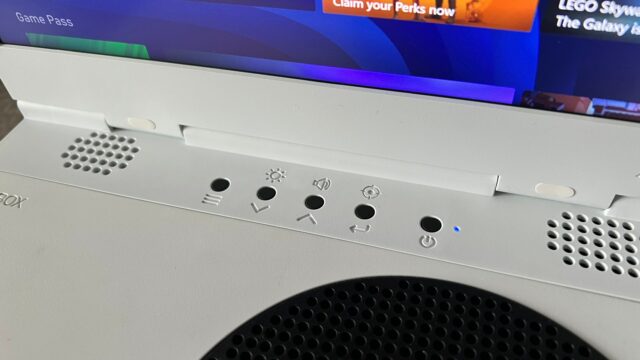 The xScreen leaves a gap to connect the console’s power supply as well as utilize the storage expansion slot with a Seagate storage card. However, The major drawback to the xScreen is that it does cover a USB-A port and ethernet connection. The loss of a USB-A port isn’t the end of the world as one is still made available on the front of the console. However, using the xScreen, users are forced to use Wi-Fi connectivity.

As far as connecting the xScreen to the Xbox Series S, it’s a fairly straightforward process. The display connects via the console’s HDMI port and one of the USB-A ports on the rear. The plug-and-play design requires no other fuss aside from two screwed-on clips that attach securely to the xScreen and the console’s sides. Even with the screws fixed to the devices, the xScreen maintains a tight and compact design. 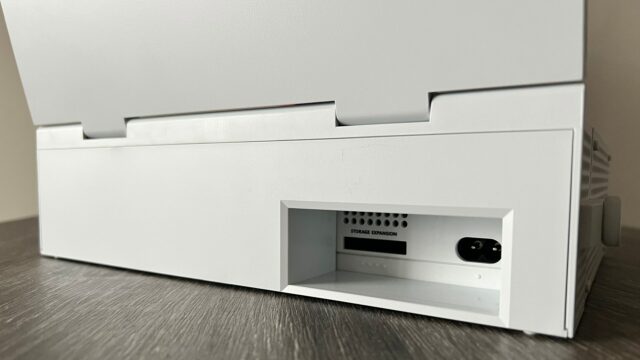 On top of the standard xScreen kit, UPSpec Gaming does have two core accessories available. Both of which were sent by the company along with the display unit. The xScreen Case is available and serves as a great way to pack the xScreen when attached to the console. You can even secure a power cord to its interior using velcro straps and even has enough room to throw in an Xbox controller. The other is the xScreen Stand Feet. These are designed to position the Series S and xScreen upright. However, I struggle to find a pragmatic use case for these. Unless you’re very tight on space, you’re probably better off keeping the Series S in its typical orientation.

As mentioned, I took the xScreen and Series S on my latest vacation. While taking a lot of time to unplug and relax, this is the busiest time of year for gaming. Therefore, I was able to keep up with a select few titles while travelling. For instance, I plugged the Xbox Series S into an available wall plug at Toronto’s Pearson Airport, log into the Wi-Fi and loaded into A Plague’s Tale: Requiem while waiting to board. On the seldom quieter nights on my vacation, I was able to continue chipping away at my progress in Scorn as well as a few other titles at the hotel. 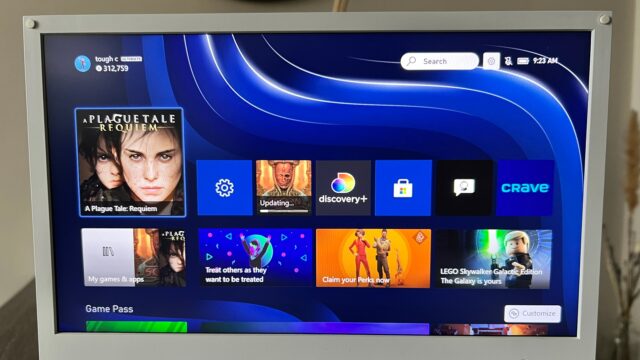 Throughout my on-the-go testing, and subsequent use at home, I’ve found that the xScreen delivers a very serviceable experience. Off the top, users will want to manually adjust the Xbox’s settings after plugging in the display. For one reason or another, the default is set to 720p, undercutting what the xScreen is capable of. With 60Hz, I found that the frame rates reached the expectations I have with many displays nowadays.

The picture quality on the 1080p display was pretty impressive. I found many games looked sharp, despite it being an 11.6-inch screen. It’s been ages since I’ve played a console game on a screen that small and I was worried details and text would be harsh on the eyes. However, my fears were put to rest. Also, even though the display is backed by an OLED panel, games remained very vibrant, even on the default brightness settings. 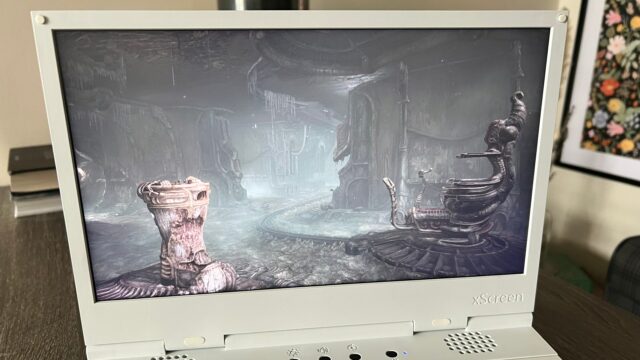 One neat little feature that I think may appeal to FPS players is the crosshair feature. With Call of Duty: Modern Warfare 2 now available, anyone using the xScreen makes use of a crosshair appearing on the screen. This feature isn’t for everyone. It certainly draws back to CS: GO and the like. Though, it’s an interesting feature to include and may appeal to players in the FPS genre.

UpSpec Gaming’s xScreen is a wonderful companion piece to Xbox’s entry-level system. The Xbox Series S is already a portable and affordable entryway into the current generation of gaming. If you have a few upcoming trips planned and want to bring your Xbox library with you, the xScreen is a great accessory to include. Though, with it being $250 USD, it’s highly suggested that the display exclusively serves as an out-of-the-home alternative. Due to its size and 1080p limitations, the xScreen is likely in no position to replace a monitor or display in your living room.

The xScreen for Xbox Series S is available now with shipping to Canada available.