Yahoo! has today announced the launch of an all new, completely revamped Yahoo Messenger app, which is now rolling out on iOS, Android, on the Web and in Yahoo Mail on the desktop. The company first launched Yahoo Messenger back in 1998 as an alternative to AIM, which was a desktop instant messaging app. But now, it’s a brand new world when it comes to messaging, and the company has tried to reboot the old Yahoo Messenger with a brand new look and improved features. 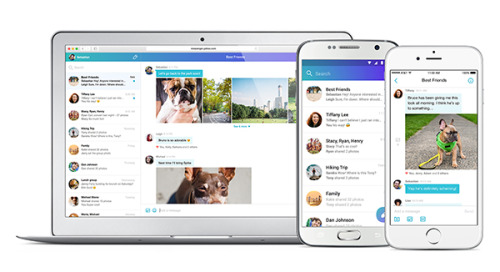 The new Yahoo Messenger app has a much cleaner and polished interface with circular avatars, though it looks just like any other messaging app. The app also combines photos into nice, easy-to-browse in-line photo albums. One of the key features of the new app is the ability to “unsend” the messages if you regret sending them. Yahoo will simply wipe the message from its servers and delete it from your recipient’s phone. If you do it quickly enough, chances are your recipient won’t even notice that you sent a message. Lastly, instead of relying on stickers or emoji, the app lets you send GIFs directly from the app.

GIFs Are The New Emoji

Before emojis there was that awkward moment in messaging where you were unsure what the other person really meant. Then came emojis, which helped you to express yourself. But why limit your reaction to an emoji? Everyone loves a GIF! Now you can search and find the perfect GIF in the new Yahoo Messenger app. Get instant access to a virtually unlimited and ever-growing library of GIFs pulled from the Tumblr community, where tomorrow’s most popular GIFs are born each day.

Speed with communications is critical and the new Yahoo Messenger sets the bar in speed. In an area like photo sharing, it is almost inconceivably fast. Syncing conversations between Yahoo Messenger on the Web, in Yahoo Mail and your smartphone happens almost in real-time.

Give the new Yahoo Messenger a try and let us know what you think.

Apple's long-awaited AR/VR headset may not start shipping until the second half of 2023 due to a delay caused by some "software-related issues," according to TF International Securities analyst Ming-Chi Kuo. Kuo previously had the headset pegged for a second-quarter release. He said in a tweet that his sources indicate components for the mixed-reality headset...
Nehal Malik
4 mins ago