Yale Locks and Hardware has today announced the availability of Apple HomeKit and Siri support for its Assure smart locks, in the form of a new iM1 Network Module, which will hit major retail stores in Canada and the U.S. on October 16 for a suggested retail price of US $49.99. Users will also have the option to purchase an Assure Lock with the iM1 Network Module for US $219.99. 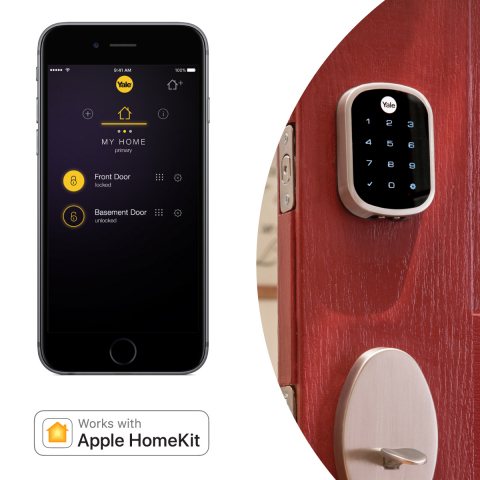 The new Yale iM1 Network Module will allow users to lock and unlock their home using the Apple Home app or Siri on an iPhone, iPad or Apple Watch, whereas the Yale Secure app will let users easily check battery status, manage up to 25 PIN codes, see current lock status, customize lock settings, name a lock and add a new lock. Locking and unlocking automatically and away from home requires a 4th gen. Apple TV 4th or an iPad set up as a home hub.

“We strive to constantly develop products that enhance our user’s everyday lives and we are extremely excited to continue this with the launch of our iM1 Network Module and to offer iPhone users the ability to integrate Yale locks into their connected home,” said Jason Williams, President, ASSA ABLOY U.S. Residential Group, which includes Yale Residential.

Apple HomeKit also provides homeowners with the ability to create ‘scenes’ to generate a sequence of actions based on a certain command or event. For example, “Hey Siri, I’m going to bed,” might cause the front door to lock, the thermostat to turn down and the kitchen lights to turn off.

The module will initially be compatible with the new Assure Lock SL (YRD256) and the Assure Lock Key Free Touchscreen (YRD246). It will be available to purchase at Best Buy, Lowe’s SmartSpot stores, Lowes.com and P.C. Richard & Son.

Fresh off the heels of the launch of Apple's HomePod (2nd-Gen), TF International Securities' Apple analyst Ming-Chi Kuo believes a successor to the HomePod mini 2 could be on its way. In a tweet thread surrounding Apple supplier Goertek, Kuo discussed that the Weifang-based components company has "secured NPI and assembly orders" for the ‌HomePod mini‌...
Steve Vegvari
45 mins ago