You Can Stream ‘Lightyear’ on Disney+ Starting August 3 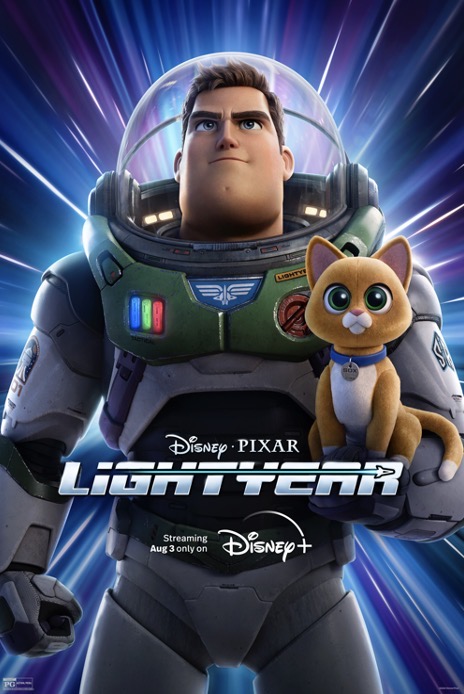 A new ad spot was released celebrating the upcoming streaming launch of ‘Lightyear’ on Disney+, which you can see below:

Get ready to blast off with Disney and Pixar’s #Lightyear streaming August 3 only on @DisneyPlus. 🚀💫 pic.twitter.com/iiXGgbcJvE

“’Lightyear’ looks amazing on the big screen, of course, but we are so excited to bring it to Disney+,” said director Angus MacLane, in an issued statement. “We devoted years of our lives to this film and we are so proud of it. We want to share it with as many people as possible. Disney+ not only gives more fans an opportunity to see ‘Lightyear,’ it gives us all the means to see it again and again.”

The synopsis of Lightyear is as follows:

A sci-fi action adventure and the definitive origin story of Buzz Lightyear, the hero who inspired the toy, “Lightyear” follows the legendary Space Ranger after he’s marooned on a hostile planet 4.2 million light-years from Earth alongside his commander and their crew. As Buzz tries to find a way back home through space and time, he’s joined by a group of ambitious recruits and his charming robot companion cat, Sox. Complicating matters and threatening the mission is the arrival of Zurg, an imposing presence with an army of ruthless robots and a mysterious agenda.

‘Lightyear’ is directed by Angus MacLane (co-director “Finding Dory”), produced by Galyn Susman (“Toy Story That Time Forgot”) and features a score by award-winning composer Michael Giacchino (“The Batman,” “Up”). You can still catch ‘Lightyear’ in theatres but the streaming release on Disney+ in Canada and beyond is August 3, 2022.

Apple and Facebook could have become business partners in what would have been an extremely lucrative advertising venture — reports The Wall Street Journal. According to the publication, Apple proposed several ad revenue-sharing arrangements to Facebook over the years. Apple execs reportedly said they wanted to "build businesses together." The two tech giants even discussed...
Nehal Malik
4 hours ago

Dropbox support has just confirmed that a public beta with full support for macOS will be released in Q4 this year, making the desktop app fully compatible with macOS 12.3 (Monterey). Dropbox users on macOS 12.3 see a compatibility warning about the Dropbox system extension, which results in users being unable to open online-only files stored...
Usman Qureshi
4 hours ago

WhatsApp has simplified the process of setting up Disappearing Messages by allowing users to set default Disappearing Messages for new and existing chats all at once. Users can now choose their duration timer and then select and apply it to whichever chats they want. For those who aren’t familiar, WhatsApp lets you send messages that disappear...
Usman Qureshi
5 hours ago