YouTube today announced the launch of their new Video Quality Report in Canada, which determines the performance of your local internet service provider when it comes to streaming videos from the site:

All ISPs quote their peak speeds in megabits per second, but what does having a high Mbps rate actually mean for your experience? Current online speed tests only measure the speed it takes to transfer data from the ISP servers closest to your doorstep, and these last-mile measurements don’t always accurately reflect how quickly your favourite sites actually load online.

That’s why we decided to use a simple test that provides results everyone can understand: a truly fast internet connection means you should expect your favourite sites and apps to work smoothly, even when streaming high-definition content.

In a nutshell, if you’re a fan of YouTube, you can quickly and easily determine which ISP in your area provides the most consistent HD streams. For example, take a look at the providers of Shaw and TELUS in my area below: 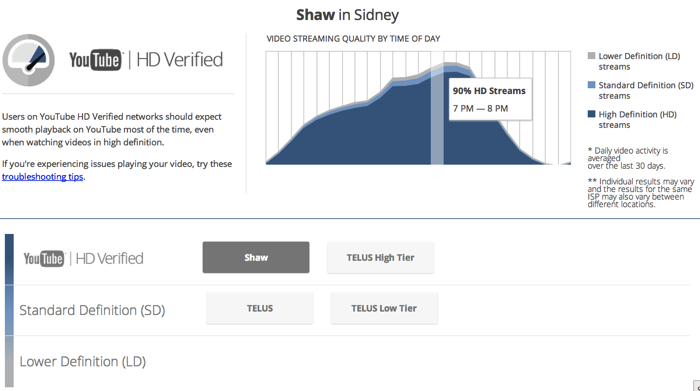 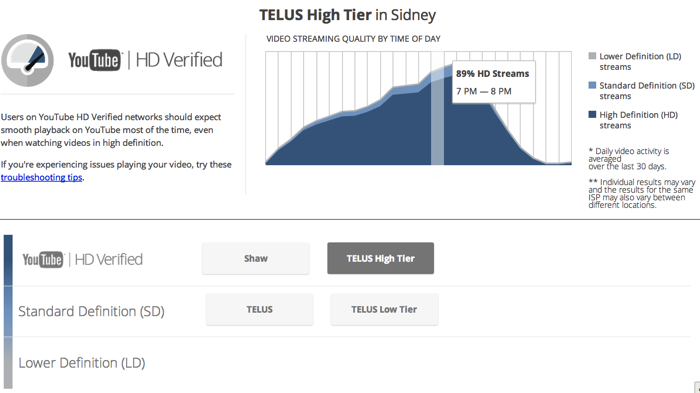 At a rough peak period from 7PM-8PM, Shaw serves 90% HD streams while TELUS serves 89%, based on their high speed plans, which YouTube labels as ‘HD Verified’. This can play an important role if you want the highest quality YouTube stream on your iOS device or Mac.

YouTube says data compiled in the report is based on the billions of hours of videos streamed monthly and they then determine how quickly all videos loaded over the past 30 days; eventually data is narrowed down to internet providers by location and available speeds during 90 percent of measurements.

How does your internet provider fare in YouTube’s Video Quality Report? You can check out the results in your area by visiting here. Slow internet is definitely a #firstworldproblem, and an aggravating one.