Google has launched a new YouTube channel called Spotlight Canada, which features “the best and buzziest Canadian content on YouTube,” highlighting both English and French stars and other emerging talent in Canada. 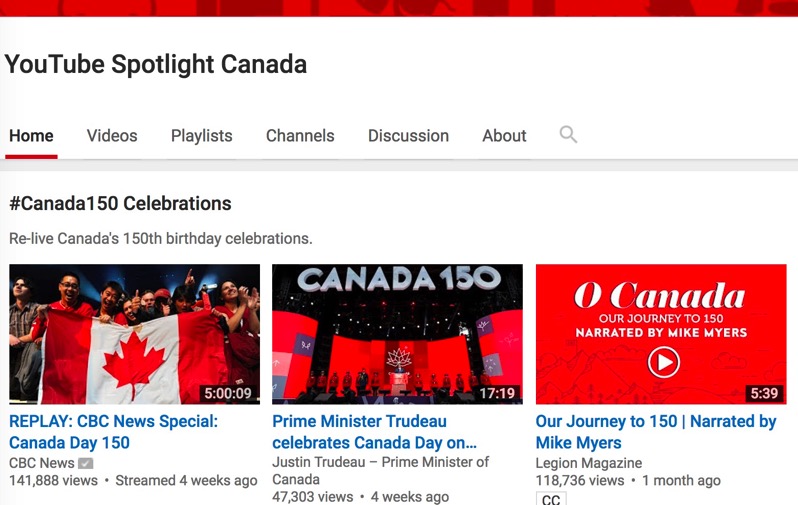 The channel will highlight trending and buzz worthy videos every month, while also have themed playlists to assist Canadians in exploring what’s trending.

“Canada is the first country to have its own Spotlight channel dedicated solely to local creators,” explained Marie Josée Lamothe, Managing Director, Quebec, Google Canada, in a press release.

“Canadians make up one of the world’s most vibrant communities on YouTube — watchtime in Canada has grown 30% over last year, and our Canadian YouTubers are exploding internationally. We are so proud of their success and want to do more to share it here at home.”

Google says YouTube is also launching its Creator on the Rise feature in Canada on August 2, 2017, which highlights growing and rising Canadian creators.

YouTube says 90 per cent of views on Canadian channels come from outside the country, higher than any other nation on the platform.

YouTube says they also saw a 65% increase in the number of Canadian channels with over 100,000 subscribers, while watch time for Canadian broadcast TV channels has jump over 400% in the past three years.

Great idea by YouTube. With cable TV costs rising in Canada, more Canadians are turning to other alternative entertainment sources and YouTube is one of them.