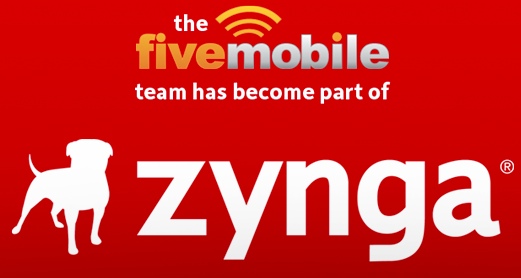 Zynga is the world’s biggest developer of Facebook games and also the maker behind iOS hits like Words With Friends (think you got game? My username is: iphoneincanada). Today they have acquired a piece of Canada with their acquisition of Five Mobile, a development team from Toronto.

Zynga has been making headlines as their IPO is set to generate $1-2 billion dollars, and their latest scoop of Five Mobile marks their 13th addition in 15 months. Congrats to the Five Mobile team–you’ve hit the jackpot.

Zynga is crossing the border! Today we are excited to announce a new addition to the Zynga family, the Toronto-based Five Mobile team. In addition to the team, Zynga is also acquiring certain assets and Intellectual Property developed by Five Mobile.

Five Mobile, now Zynga Toronto, creates compelling, robust and scalable mobile applications. The team has worked closely with some of the largest media and technology companies in North America across a multitude of platforms and handsets. This talented group will focus on advancing multiple initiatives within Zynga mobile. Mobile industry veterans and Five Mobile founders Ameet Shah, Jeff Zakrzewski, Oliver Tabay, and Troy Hubman will all join the Zynga team. Ameet Shah will head up our Zynga Toronto studio and report up through our Zynga mobile team, led by David Ko.

As a key component of our mobile efforts moving forward, Zynga Toronto will help position us in a hotbed of mobile development talent. So, if youâ€™re ever in the area, be sure to stop by for someÂ poutineÂ and, uh, maple syrup (can you tell weâ€™re not locals?).