Having recently finished Walter Isaacson’s biography of Steve Jobs and hungry for more, I turned to the internet. I watched Steve and Bill Gates dual interview at D5; I watched Steve alone at D8; I watch the Stanford address; then Steve reading of the Think Different ad; then some old WWDC presentations. All great stuff, but nothing I hadn’t seen or heard before.

Then luck found me. Searching iTunes University I made two exciting discoveries. Both are of audio recordings of a younger jobs. Both give further insight into Jobs’ character and how he viewed the world. Both I’ve never heard before.

The first recording is only seven-minutes long and comes from 1982 when a then 26-year old Steve Jobs addressed the Academy of Achievements at its Summit in New Orleans:

Steve Jobs was still a mischievous 26-year-old iconoclast when he addressed the Academy of Achievement at its 1982 Summit in New Orleans, Louisiana. Steve Jobs participated in the Academy’s Summit at the suggestion of his mentor Bill Hewlett who attended the 1981 Summit as a Golden Plate honoree when it was held in Dallas, Texas. In this audio podcast he urges the Academy’s student delegates to seek out the widest possible variety of experience and learn to think for themselves.

It can be downloaded as a podcast here.

The second is nearly 15 minutes long and comes from August 27, 1991 when Reed College presented Steve with the Vollum Award:

Audio of the presentation of the Vollum Award to Steve Jobs, called the “father of the personal computer” by presenter Richard Crandall ’69 at Reed College in 1991. Jobs attended Reed College in the early ’70s and took calligraphy from Robert Palladino. 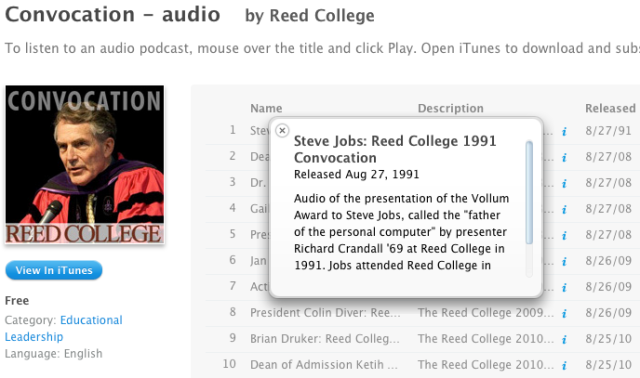 The recording can be download as a podcast here. Both of these speeches precede the famous Stanford University address made later by Steve in 2005, seen as one of the greatest commencement speeches of all time. This post is spoiler free, but feel free to share your thoughts in the comments.