PBS has released a YouTube preview of a Charlie Rose interview with Mark Zuckerberg, founder of Facebook, and Sheryl Sandberg, the company’s chief operating officer. 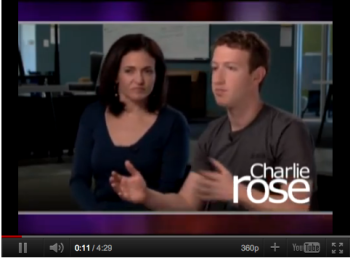 The interview covers everything from Facebook’s plans to become publicly traded, privacy, China, the Arab spring, the lack of engineering talent in U.S., and questions about their supposed “war” with other tech companies: primarily Google, Apple, Facebook, and Amazon.

Zuckerberg plays down the idea of a war, noting that Facebook is a social network and doesn’t compete with hardware companies. He acknowledges that Facebook competes with Google who is “trying to build their own little version of Facebook,” but remarks that for one company to “win” doesn’t mean the other has to “lose.”

In Steve Jobs by Walter Isaacson, it’s revealed that Jobs viewed it as his responsibility to give advice to up-and-coming technology executives, including Zuckerberg who he admired “for not selling out” and building a company. Part of that advice, Zuckerberg reveals in the interview, was to sharpen Facebook’s focus and build a high-quality team.

Mark Zuckerberg: How to build a team around you, right, that’s focused on building as high quality and good things as you are. How to keep an organization focused, right, when I think the tendency for larger companies is to try to fray and go into all these different areas. Yeah, I mean a lot just on the aesthetics and kind of mission orientation of companies. I mean, Apple is a company that is so focused on just building products that — for their customers and their users. And — and that’s like — it’s such a deep part of their mission is build these beautiful products for their users. And I think we connected a lot on this level of, okay, Facebook has this mission that’s really more than just trying to build a company, right, that has a market cap or a value. It’s like we’re trying to do this thing in the world. And I don’t know, a lot of it I just think we connected on that level.

The interview is scheduled to be broadcast on PBS on Monday evening and on Bloomberg TV  on Tuesday. It will also be available on the Web at the site for Mr. Rose’s show.