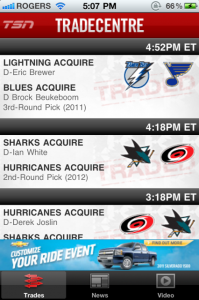 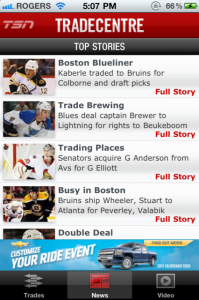 This app covers all of the breaking trades you want to hear about and includes Push Notifications so you get them in real time, before your friends do. Even better, starting on 8AM EST on the 28th, you’ll be able to watch a live video stream within the app!

Nobody covers Trade Deadline Day like TSN, and now you can stay up-to-the-second with our TradeCentre app for iPhone and iPad. You can:

– See the entire dayâ€™s list of trades, updating in real-time
– Get â€˜pushâ€™ notifications for every trade (so even if youâ€™re in another app youâ€™ll know whatâ€™s happening)
– Watch the LIVE TradeCentre HD telecast plus reports from our reporters
– Read news and analysis from the SportsCentre newsroom

Vsn 1.0 â€“ Initial Release
Vsn 2.0 – Now supports iPad, featuring a unique landscape view that gives you everything on one screen

Mad props to the TSN team for all of their iOS apps: TSN Mobile and Masters Live (my favourite). TradeCentre edition is also for the iPad! 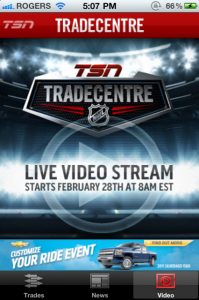 If you’re a hockey fan, then you need this app. If you’re a current NHL player, you’ll want this too. There’s no better way to find out you’ve been traded than via Push Notifications on your iPhone. 😉