Don’t like math? New to Canada? Want to track your cash during the day? Check out iCoin Canada!

iCoin is a brand-new application to the iTunes App Store that is the most perfect application for the upcoming Vancouver 2010 Olympic Games. The app is developed by a local Vancouver firm and helps to identify the various types of Canadian currency.

iCoin is essentially a currency calculator that focuses on Canadian coins and bills. The app is great for visitors to Canada, such as the many people that will visit Vancouver in 2010 for the Olympic Games, but the app is also great for Canadians to use.

iCoin makes it very simple to identify the denomination of Canadian coins and bills. The app has a coin section and a bill section in which the user can tally up the amount of money they have. For example, if you have a $20 bill and two $1 coins, you would tap on the $20 bill once and the $1 coin twice. Each tap of a coin gives you a fun “coin dropping” sound and each tap of a bill gives you a “paper folding” sound. You can also clear your balance entirely and start at zero.

Individuals who are not familiar with Canadian currency can choose to use a text option that visually displays the value of the Canadian coin or bill. That way if the user is not aware of the value of Canadian coins or bills, they can see the actual value in numerical form. To add to the helpfulness of the app, when you close iCoin, your previous balance is retained when you re-open the app.

The great thing about iCoin is its flexibility with so many different uses; travellers in Canada, store owners, restaurant staff, students, business users, practically everyone. The app is so clean and laid out with nice visuals which makes the app very easy to use.

I hope in the future there will be an update that adds the ability to save a day balance so you can see your expenditures across a length of time for example. 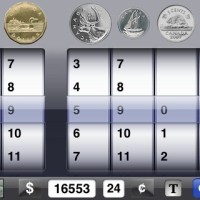 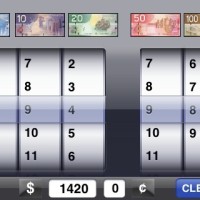 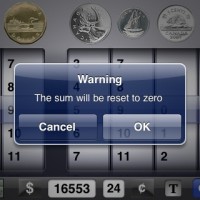 Features aside, controls and navigation is where this app truly shines. The app has an extremely clean interface with very clear numbers which makes for ease of use. The total amount of chosen currency adds and subtracts at the bottom of the app with clear symbols of which number is dollars and which number is cents.

Adding or subtracting coins or bills is done by simply tapping on the actual picture/amount of the coin/bill or by swiping up and down along the wheel that has the number of times you want to add or subtract the denomination.

Exiting the app retains your previous balance and to clear the balance to zero you can either tap the “Clear” button or shake your iPhone.

For individuals who are new to Canada, travelling within Canada, or have no idea what the Canadian currency looks up, iCoin is an extremely valuable tool. However the app can also be used just as well by Canadians of all ages that want to track their money or spending throughout a period of time.

I have done a lot of travelling around the world and while it would have been nice to have such an app, it would not be entirely necessary since it is fairly easy to understand a local currency. Moreover, most world currencies, including Canada, have the numerical value on the actually bill or coin, so it can be somewhat easy to understand the currency without the use of an aid.

iCoin Canada is available in the iTunes App Store for $1.99.