After I was finished playing with qStatus, I was trying to figure out a meaningful summary to provide to you, but I cannot express my satisfaction beyond a single line; this is the fastest, most efficient Twitter (and Facebook) related app to post and update your status.

qStatus is small and fast and extremely minimal in terms of menu items. Navigation is a breeze and the user interface is clean. My only hiccup during the whole process was when the app was starting and I was trying to pair my Twitter account. The first time Twitter indicated that I had â€œdeclinedâ€ access to the app but on a second go, I got it working. I do not remember why it happened, but I am almost sure it was my error considering I just got into Twitter about 2 weeks ago. 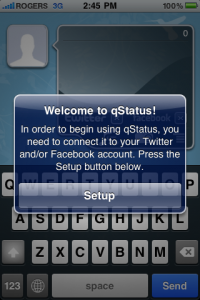 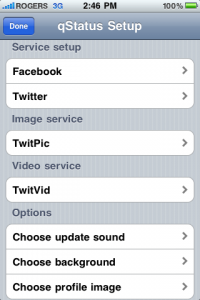 So as I mentioned above, the app is great when used primarily for Twitter and Facebook, but you can also play with other services such as TwitPic and TwitVid. Since I just started using Twitter, I am going to focus on my experience with that end of the app, but the Facebook integration is identical, as when you post updates, they go to both Twitter and Facebook or just one of the two services.

Once you sync up your Twitter (or Facebook) account, you are brought to a page that is seen in the image below. It is here where you just type and hit Send. Type and Send. Type and Send. Quick, fast, no delays or waiting for anything, but this lack of waiting is also something that bothers me about the app, which we will touch on later. 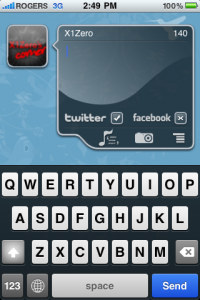 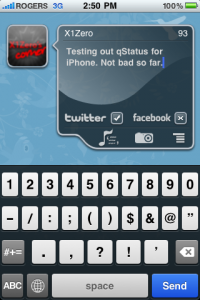 So, type and send. On this same interface, you can also tap the menu icon, which is represented by a series of horizontal bars (see above image). Tapping this opens up options that include the following: 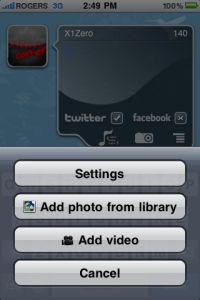 Next to the menu icon you have a camera icon which allows you to take a photo and add it directly into the typing box. Oddly enough, you cannot take a video using this function, only a still photo.

Next to the camera icon, and the last icon, is a small musical note. This only works if you are currently listening to your iPod. So as you can see in the image below, I am listening to Dean Martin and when I tap the music note icon, qStatus enters the artist and name of the song, along with an iTunes link to the song. 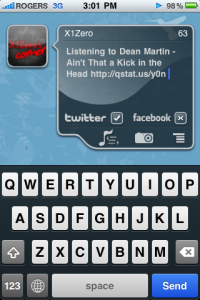 As an addition, when this music link is entered (or any link at all), you get additional choices from the menu icon (horizontal bars). These new choices let you shorten the link (â€œShorten URLâ€) or â€œDedicate current songâ€, which as the name describes, lets you dedicate the song and package it up for someone. 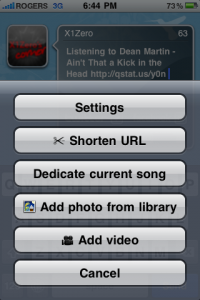 qStatus also comes with a neat feature set called “Tweet Long” and “Tweet Shrink”. What these features do is when you have a Tweet that exceeds the 140 character limit, the app cuts down your tweet into slang (so “see” becomes “c”) and any remaining characters get linked to a qStatus web page with the rest of your tweet.

On the settings end of the app, you actually get a very nice slew of options. Your options under settings include: 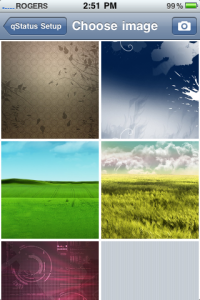 Now comes the part that I do not like, which I alluded to earlier. As mentioned previously, a definite strength of the app is the speed, which is a direct result of the app not having anything else going on in it such as a friends list, viewing your friends tweets/updates, viewing direct messages or anything related.

Of course depending on your preferences, you may like some of these options or you may not like them and find them unnecessary. Well I happen to like them and like them a lot, which results in me find it unfortunate that the app did not include this. Specifically, I miss the view of updates from the people I am following.

If you have not figured it out already, this means that if you want to use this app for your tweets/updates, you also need another app for everything that qStatus does not include. Again, you may prefer it this way but I do not. I would much rather have an all-in-one app instead of having to use two or three apps just to satisfy my Twitter needs.

This could just be the Apple fan talking in me, but I would gladly give up some speed in the app with the inclusion of additional screens that show me my friends replies, my direct messages and my mentions (all Twitter based).

Overall, especially since I am new to Twitter, qStatus is fantastic in terms of speed and clean UI navigation. When compared to such apps as TweetDeck or Twitterfon, qStatus is visibly faster. But as good as qStatus is with what it does have, it suffers with the omission of what it could have. However in the apps defence, I know many people who simply enjoy using multiple apps for Twitter or Facebook, but if you are like me and would prefer a solid all-one-app, unforuntaly qStatus is not our winner.

qStatus is available in the iTunes App Store for $0.99.

You can check out a demo video of qStatus here.

I am going to giveaway one (1) copy of qStatus today! To win:

2. Post a comment below with your Twitter user name after you have followed me (that way I know who is in the contest). If youâ€™re already following me, post your user name so I can confirm it!

3. The winner will be announced on Twitter! Thatâ€™s the only way you can find out if youâ€™ve won or not! I will be contacting the winners via direct message on Twitter.

1.) Make sure toÂ include your email in theÂ commentÂ entry form or I cannot contact you!