Looking for a way to control iTunes on your computer wirelessly with your iPhone or iPod Touch? Look no further than the official Apple Remote iPhone app. This app lets you view your iTunes library, select songs and playlists, control the volume, and much more. 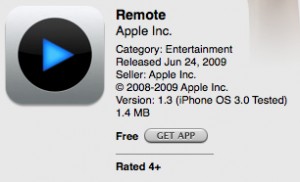 A recent update to the Remote iPhone app has included simple finger gestures to control your Apple TV (this new features requires iPhone OS 3.0). After checking out the following video, once again I am impressed at what this little app can do. If you own an Apple TV and have an iPhone, it looks like this latest update is a must have for you!

For those already using this app with your Apple TV, how do you like the new features?