The Canucks Live app for the 2011-2012 NHL season has finally hit the App Store. Launched a couple days ago, the 33.2MB download this time around also brings support for the iPad.

The Canucks Live app will bring live televised games to your iPhone and iPad over both WiFi and 3G. The cost once again is $9.99, which isn’t bad considering you will get to watch the rest of the regular season from Rogers Sportsnet, and once again it’s limited to BC/Yukon users only.

Ten dollars is pretty decent to be able to watch Canucks games on both your iPhone and iPad from anywhere. Games are streamed by NHL Gamecenter.

Enhance the Official Canucks app with this NHL® companion app and watch Rogers Sportsnet and Sportsnet One games live (for BC and Yukon users only).

This app adds live game streaming, highlights and condensed games to the Official Canucks App, as well as game previews, recaps, schedule and real time scoring for all users. Getting you even closer to your favourite team. Live streaming, highlights and condensed game video available ONLY to users located in the Province of British Columbia and the Yukon Territory. Users located outside of these areas will not be able to watch games. 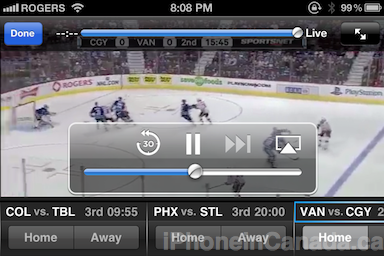 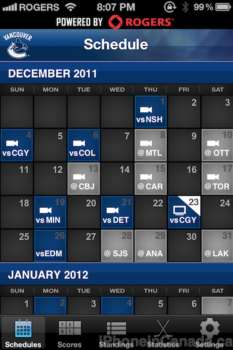 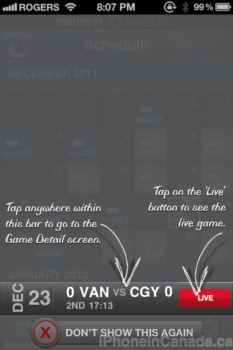 This new version of the app comes enabled with AirPlay–and it works great. I was able to stream the game to my Apple TV with average quality. Still though, the game was watchable. Even if you don’t get this app, you can still listen to Team1040 on your iPhone.

As of writing, the iPad version has free access to other NHL games as well! Bonus!