Have you ever saved 50% off restaurants or stores by using “group buy” websites such asÂ Groupon or Living Social? There are now so many of these sites popping up it’s hard to keep track of them. Instead of downloading all their iPhone apps (or subscribing to emails), why not get one app that will aggregate them all?

The Dealradar iPhone app will let you see all the deals in your area right on your phone. There’s now an easy way to track the hottest deals all in one place!

After downloading the app, just select your city and Dealradar will locate all the deals in your area. Deals are separated into categories such as Food, Automotive, etc., so it’s really easy to use. Here’s the iTunes description:

Dealradar.com provides you with a free, fast and simple way to find the best offers available from over 100 daily deal sites producing more than 400 daily deals across the US, UK, Canada and Australia. Save as much as 90 percent at restaurants, spas, sporting events and on other products and services. 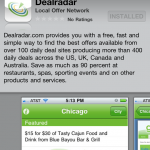 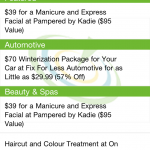 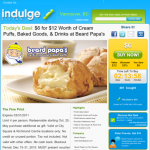 This is definitely a worthy app to have on your iPhone if you’re looking for some amazing group buys in your area. Let me know how this app works for you!