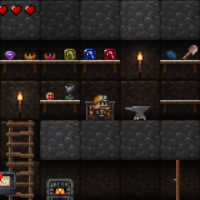 Ever heard of PixBits? Me neither. They’re fresh out of the oven and boy are they starting with a bang. This new indie developer has recently released their first title, Junk Jack, and those of you who have played Minecraft will feel right at home, sort of. The big difference between the two is the fact that Junk Jack is 2D compared to Minecrafts 3D. Does that make it worse? Quite the contrary as I actually like it just a bit better!

Junk Jack starts off by placing you on a randomly generated world consisting of blocks from which you can mine (destroy) or place. Collecting the mineral allows you to put it through a simple crafting process allowing you to turn it into many things. Think; plane of wood put to a lump of coal creates a torch, or two lumps of iron and a lump of coal create an iron ingot. It’s really easy to get your head around and with the three by three grid in which you place the minerals and tools, it’s doesn’t take long before you begin to memorize their blueprints. 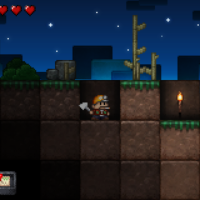 Now while you might think that building things is the goal of the game, you’re half right and half wrong. There’s isn’t truly a goal as much as there is a community objective. Using minerals taken from the ground to build a home and furniture to contain your findings is fun and all, but the greatest amount of fun is exploring. Not the surface, but underground.

I have spent an unhealthy amount of time digging deeper and deeper into the ground and I have found some amazing things. Ancient Mayan ruins, shards of Egyptian pyramids, and mushroom worlds to name a few. Although the one thing I haven’t found is the bottom. Rumours of there being a Hell has sent me into a frenzy to find it, but to no success as I only ran into denser and denser minerals forcing me to resurface and scourge the resources to create a pickaxe strong enough to crack it. Word of a super substance being located just before the bottom gives a good sense to where I have reached. I’ve found traces of gold lumps, and that should be the last ore before it. 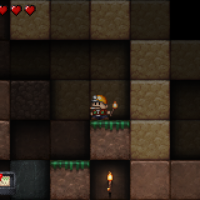 Now in all the fun I’ve been having playing this game, I’m not going to ignore the faults, as there definitely are some. To kick it off, there’s no instruction manual. Well, there is, but you kind of have to preform the task it helps you complete before you actually get to read it. Kinda backwards, huh? Also once you chop down a tree, it’s gone. Forever. You have to start a new world (your inventory travels with you, thankfully) and you have to resort to mining those trees to supply your wood source. A little annoying. Lastly the game crashes quite frequently one any device older than the fourth gen. So iPhone 3GS and iPod touch 3rd gen users, buckle up. 2nd and 1st gen users, I fear for you. All is not lost though! PixBits has apparently sent out an update to fix many if not all of the initial bugs found with the game. Crashes, instruction manual woes may be healed but I’ll let you know when that time comes. As for the forestry, there is word of an add-on of farming and cooking support in a later update. I’m pretty excited to say the least.

All in all, Junk Jack is a great title and for $2.99 it’s without a doubt a must-have. There’s definitely a lot they still have to fix, but what’s there so far has yet to disappoint.

Give it a shot and tell me what you think. Have you discovered a new craft or found a new biome (egyptian, mushroom, forest)? Let us know!