The following is a guest post review of the iPhone app, EpicWin by William H.

An Epic Tale of Laundry Washed

Question: How do you get a gamer off his butt and doing the real life things that need doing, that pile up while he’s off questing in his virtual world?

Answer: Make real chores the quests. That’s just what the new iPhone app EpicWin does. It attempts to make getting things done enticing by combining RPG gaming elements with a to-do list. Hey, you got your real-life in my fantasy world!

In EpicWin, you create a character from among several RPG archetypes, such as an undead skeleton or beefy warrior type. You can also purchase a couple more through in-app purchasing. Then you create the chores in the to-do list, and assign their “epicness” value, which serves as a graduated rating of importance.

You can also categorize the type of feat your chore falls under, be it a feat of strengh or endurance or spirit, for example. As you cross the chores off your list, you gain epicness and move forward towards the loot in your path, as well as add to your character’s attributes. 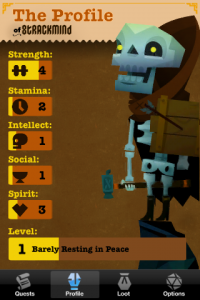 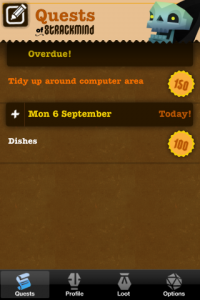 EpicWin is fun for what is is, but is lacking in features for each of the elements that it is smooshing together. On the to-do app side, there is no time scheduling for chores: you can only pick a day to do it, not a specific time. As well, there is no way to send reminders of what you have scheduled. Thus, you have to keep opening the app to see what needs to be done.

Organizing the chores is limited as well; there are no options to have completed quests automatically dropped from you list as you complete them, so it’s either take the extra step to delete them after completion, or run the risk of a cluttered day of done quests interspersed with things to be done. You can, however, move items up and down on the list, so at least you can keep things looking neat visually. Of course, you could always just make quests about keeping your EpicWin quests organized.

More XP! Speaking of which, it’s a bit disconcerting that you assign the XP for chores yourself. As I say, it’s an interesting way of assigning priorities to chores. The problem is that cheating is a worry for this game, although if you do that here in an app that is trying to get your life in order, you really are the lowest of the low and beyond hope. Even so, assigning too much XP to a task in order to move your character along is mighty tempting.

On the RPG side, there is no real “game” aspect. EpicWin has taken the XP and loot aspects of RPG gaming, but forgot to put an actual game in there anywhere. After completing a chore, you simply hold your finger down on a symbol on the chore, and your little character punches until the Epicness is rewarded. Then it’s a straight line right to the next bit of loot.

I understand that the battle is actually supposed to be the dishes you just smote in the sink, or the beastly hell-hound you just took out for a walk, but at least the semblence of a game included would keep things more compelling. The loot you collect is very funny stuff, though.

My last goodie was a “Double Rainbows” scroll, which promised to keep my enemies’ brains addled with glee at the sight. As I mentioned, though, none of the loot you collect, nor the attributes you gain, seem to make any difference. They are just RPG trappings used as milestones to mark your progress. The game does have great art design however, and the aforementioned twisted sense of humour will keep you chuckling along the way. 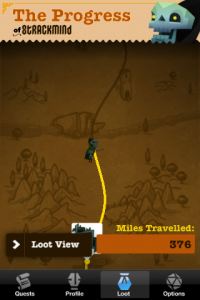 The other compelling aspect of the program are the social networking hooks to Twitter and Facebook. You can set the game to update your status when you collect loot, and seeing the progress your friends are making with their chores and the loot they collect as a result really serves as solid motivation for players.

Now that chores are getting done, my wife finally sees the value in my gaming addiction!

Anyone out there ‘playing’ EpicWin?

You can pick up EpicWin on iTunes now.