Fight For Your Honour with Pixel Ninja!

Pixel art games are on the uprise and the latest addition to the catalogue is Pixel Ninja! by Triniti Interactive Limited. This game reminds me of Metal Gear Solid 4 in the sense that even though it’s an action game with hand-to-hand combat, your main goal is to sneak around your opponents eliminating the returned combat altogether. 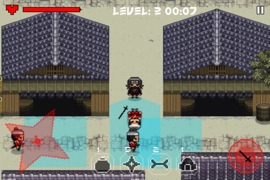 It’s plays off a mistake well as even when you get caught trying to throw a bomb or star, you have the ability to fight back rather than just ending there with a rather de-motivational “you have been caught” screen. It adds an element of recovering and I really appreciate that.

Putting the intuitive gameplay aside, the controls are good, but not great. I’ve had a couple of situations where I’ve been running away from one of the baddies and my character will stop responding or run in a direction that I have not tried making him run. In addition, the text the game uses matches the scene very well, but is difficult to read. Is the main character’s name Hanzo or Nanzo? I’m thinking Hanzo but I’m not sure. Lastly I have rarely seen (although should be noted) some graphical hiccups. Things like a black bar on the left of Hanzo/Nanzo’s body or around the dog. 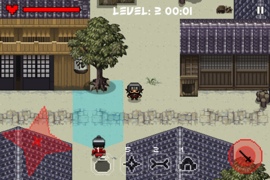 To be honest the game is fun and will stay on my iPhone for a bit, which is saying a lot considering I only have three other games on it to date, one of them being my own. It has Game Center integration, a quality soundtrack, and a story to pull it all together. I definitely suggest checking this one out.