Do I have an awesome game for you! Assassin’s Creed: Altairâ€™s Chronicles for iPhone and iPod Touch. If you are familiar with playing Assassinâ€™s Creed for PlayStation 3, Nintendo DS or xBox 360, well now you can enjoy it on the iPhone or iPod Touch. Published by Gameloft, Assassinâ€™s Creed is by far (In my opinion) one of the best action platformer games available.Â

From my first impressions of playing, I was quite impressed! For being a game ported from the Nintendo DS, it feels like it was meant to be played on the iPhone. The controls, frame rate, animations, and graphics are all well done. 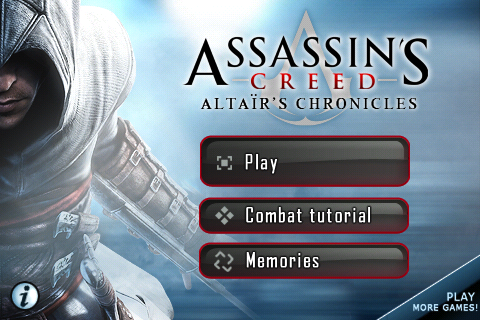 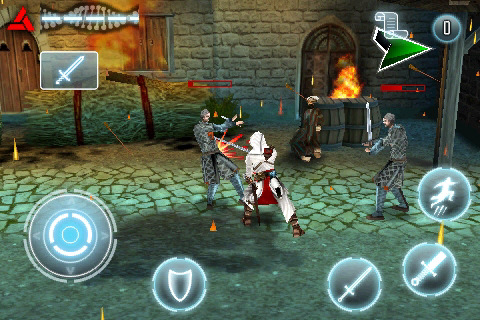 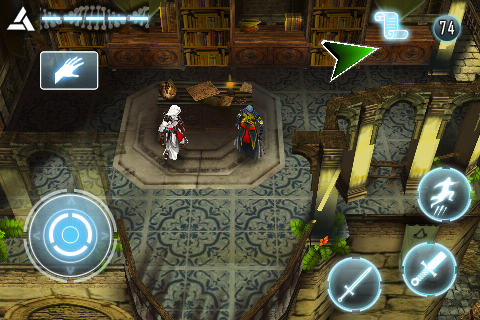 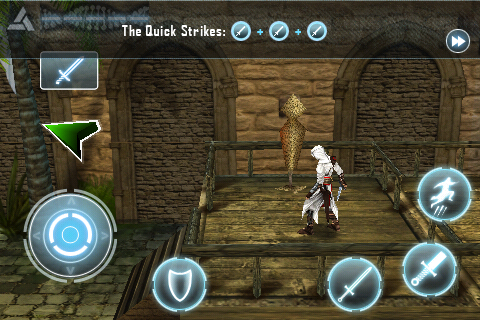 The story of the game starts off with the main character Altair (Which is you), a master assassin sent by the order of the assassins on a quest to find the chalice. (The chalice is an object which can end the crusades, that is depending on which camp owns it.) Youâ€™ll notice as you start your quest you collect orbs which upgrades your health and weapons. As you continue, the controls are very good.

You touch the analog and slowly move it left or right, your character moves slowly. As soon as you move it all the way, then youâ€™re running. You will notice on the screen as you get further on your quest that more options icons are showing. These are your fighting tactics which is based on 6 weapons, close combat or long range attacks. Example: sword, bombs, daggers, etc.

A couple features that I really thought was neat about Assassinâ€™s Creed on the iPhone were the skill based mini games, it takes patience and dexterity to pass. From pick pocketing the townâ€™s people for specific items (Keys) and pulling off stealth attacks to take down enemies, it really feels like youâ€™re actually in the game.

Well I donâ€™t want to give the game all away and would like you to have played it and see all the action packed features Assassinâ€™s Creed has. Leave some comments below and set foot out on your quest and be sure to steal the chalice from the Templars!


Assassinâ€™s Creed can be found in the App Store for $4.99. Make sure to check out the reviews in the App Store and Gameloft website for many other exciting games and releases! Enjoy and remember to be very stealth, you donâ€™t want to get caught!

P.S. Get ready for Assassin’s Creed II which will be available soon in the App Store!