Hero Defense is very much a tower defense game at heart, but instead of having a series of different characters for defense, you only get one! Your Hero.

Having only one hero as the protector changes the game quite drastically as your micromanagement becomes much more of a task. You have to constantly watch all areas of the map and move around very quickly in order to achieve your goal.

The game field (two different levels) consists of your Castle, the hero, enemies, three attack routes to your castle and two gates that block two of the three attack routes. Your ultimate goal is protect your castle, as wave after wave of enemies target it directly. You must also protect and heal yourself because if you fall, your castle will be heavily at risk of destruction as your hero re-spawns. However, from within the Castle you may access a “Castle Store” where you may use gold to purchase health and characteristic upgrades, the latter of which is very expensive.

Every time you kill an enemy (tap on the area of the map to attack), you receive gold and XP. The more gold you have, the more money you have to heal yourself, your road gates and increase your capabilities such as speed, strength and magic. But you must be mindful when spending gold, as you always want to have enough for health.

As you increase your XP (experience points) however, you can upgrade your abilities for free, so this is definitely the preferred route. But sometimes you need it faster and that is where the gold comes in to play. But like I said, the upgrades are pricey so you have to be savvy with your gold. 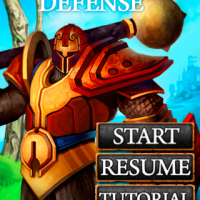 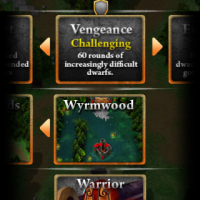 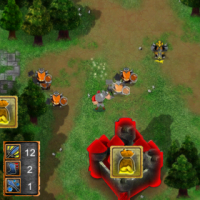 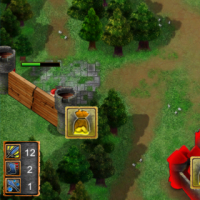 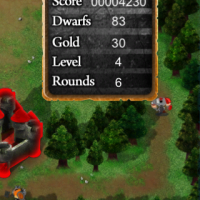 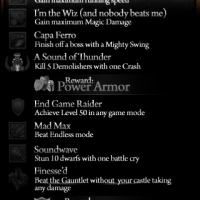 The heads-up display is really well done. Strength and health along the top and abilities along the bottom. The best comparison I can make is the World of Warcraft HUD, same idea. The game also comes with great sword clashing and destruction sounds that make the game play even more epic. Three difficulty modes determine how many rounds you go through, but I found even on the easy mode, the battle becomes difficult as you progress. You even get a few achievements to fight toward!

The only negative thing for me about the game is that I could not see the entire view of the levels I played on. The reason this causes a problem is if you are battling near the top half of the map, you cannot see at all what is going on along the bottom half.

I found this to be the number one reason why my castle lost much of its health because by the time I am done up top and move to the bottom, my castle has taken a lot of damage. I searched around for some kind of pan setting, but found nothing so far.

On a more positive note, the developer has noted that in an upcoming update the game will include new maps, a new character class, a new game mode and much more!

I am going to giveaway two (2) copies of Hero Defense today! To win, just answer the following below (creative answers get bonus points):

As the Lord of the Castle, I ask you:

“Do you think you are worthy to fend off the hordes of Dwarfs and be the Hero of your people?”

3.) One Entry Per Person. Do NOT attempt to post multiple entries under different emails and/or user names during the same contest.