We have seen a ton of racing games come out for the iPhone and iPod Touch, but we haven’t seen any official Nintendo racers, like Mariokart or F-Zero, most likely because Nintendo has their own mobile platform.Â Orion Racer, from Techlogica LTD, is a new racer for the iPhone that is on the style of F-Zero. It is a very fast paced racer, set on some giant winding tracks, in outer space. There is a few different racers to choose from, and a few different tracks to race on. There is also a 2 player mode, via Bluetooth, so you can race against a friend.

Here’s the official details from the App Store:

Orion Racer is a futuristic 3D racing game featuring hyper-paced, exhilarating action on 10 unique tracks in outer space. Loops, powerslides, and speeds of over 700MPH make Orion Racer one of the most adrenaline-pumping games for the iPhone!

Orion Racer features four modes of gameplay. You can race against a friend over Bluetooth, go for gold in the tournament, or shoot for the best lap time online, the choice is yours!

TOURNAMENT
Go on a tour across the universe while competing in 10 challenging races! Winning the tournament unlocks the fastest car in the galaxy, the F97 Orion. The final track from the tournament can also be unlocked by finishing in 3rd place overall or higher.

TIME TRIAL
Compete for the best overall lap times online! Make it into the Top 50 and your name and time will be recorded. If you’re good enough to get into the Top 25 your lap replay will be available for all to see!

2 PLAYER
Play against a friend wirelessly over Bluetooth with iPhone 3G/2nd generation iPod Touch or higher. Make winning even sweeter by viewing a full replay of your victory!

SINGLE RACE
Race against 3 AI-controlled opponents on the track of your choice. This mode is great for getting in some practice for the more difficult races in the Tournament.

Orion Racer gives you the ability to fully customize the way you play. Adjust the difficulty, steering sensitivity, throttle/brake position and more.

This game is pretty fun, on your own, or with a friend. I’m a big fan of games that allow you to connect to other iPhones, to include your friends in the fun. The racing is really fast, and can be challenging to stay off the side rails of the track. With the ability to fully customize the gameplay, you can make this as easy or as hard as you like. 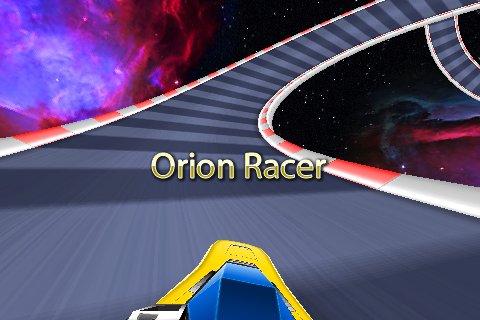 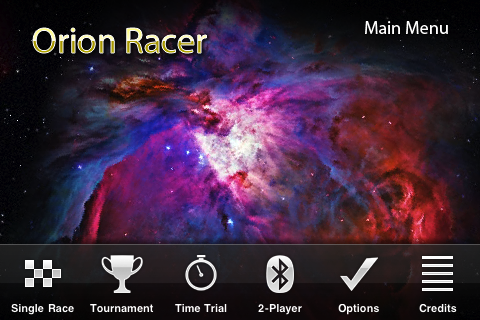 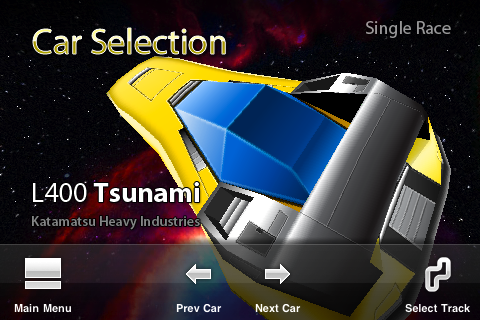 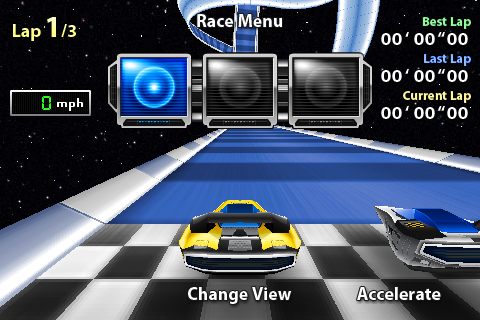 I could not get any good screen shots of the actual gameplay. It goes way too fast. As you can see, the graphics of the cars and track are simple, but decent. The backgrounds are gorgeous, though. I found myself wanting to look at the planets and nebulas, rather then keeping my eyes on the road. On my iPhone 3GS, I experienced no lag or jitter, while racing, make the gameplay real smooth. The soundtrack was just okay. It seemed like pretty generic, up beat video game music, to me.

Overall, this is a decent game, but I found myself getting a tad bored with it, after just a few races. I don’t play a lot of racing games on my iPhone, but if you’re some one who does, you will probably really enjoy this game.

Orion Racer is available in the App Store now, for $2.99