My first Brick Breaker game was on my Blackberry 8700…old. Then the iPhone came and the slew of brick breaker games on the App Store had me busy for hours.

Today I have a new brick breaker game called Radial 50 that is the most fun I have ever had with breaking bricks!

The game changes the classic game mechanic of brick breaker games. Instead of looking down on your play area and breaking bricks above you, Radial 50 is a 360Â° challenge where your paddle spins around the bricks. The bricks all stay in the middle and your paddle is on the outside. Eliminate the bricks and you move onto the next stage.

However, if you clear a path to the center of the bricks, there is a diamond sitting there that when destroyed automatically sends you to the next stage with a nice time bonus.

Having your paddle on the outside completely changes the way the game is played. With most brick breaker type games, you only need to prevent the ball from falling down past your paddle. With Radial 50, the entire 360Â° circle is a hazard. Every time the ball touches the outside wall, you lose a single bar of health. Lose too many and the round is over but your health does regenerate over time, so you have to play smart. 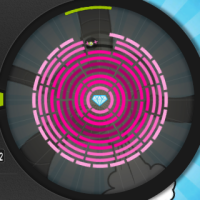 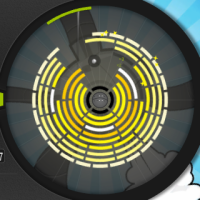 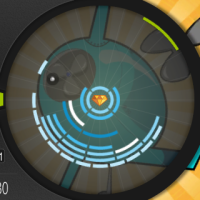 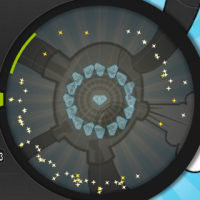 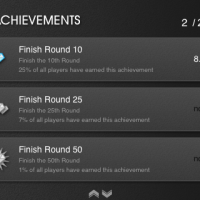 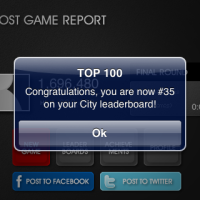 During gameplay, there are various powerups and powerdowns that you can pick up but the catch is that you do not know what it is until you grab it. So you could activate a powerup and it could be a power ball eating away at all the bricks or it could be a powerdown and half your paddle. The game challenges you to adapt to quickly changing environments.

The controls are extremely simple. You just move your thumb up or down on either the left or ride side of the iPhone screen. The game has settings for lefties and righties, which is really nice to see. Aside from controls, the game comes packed with 50 stages, location based leaderboards, a really cool save/resume feature where you can push the Home button on the iPhone and the game saves automatically and my personal favorite, achievements!

Overall, this is the best brick breaker game I have played and naturally, I have become addicted to it. With simple controls, great visuals, challenging game play and a unique spin on the game type, Radial 50 will provide hours of game time.

You can also check out the Lite version (free) that has 3 stages instead of 50 as in the full version.

Because I like this game so much, I am going to give away two copies today!