Now here is an interesting game that has almost nothing to do with what it’s called. But what it does do is make you want to play it…a lot. I give you Rock, Paper, Airplane!

Rock, Paper, Airplane! is a flight simulator in which you fly a paper airplane through various obstacles with the ultimate goal of reaching the end of the level.

Each level of the game (at least the early levels) is set in a house that has many different floating obstacles that must be avoided. The game is set in the 1950’s, so the obstacles are all very retro and include such items as retro looking lamps, phones and furniture, a “nagging” Mother, a “know-it-all” Father and various others that all must be avoided.

However within all of the obstacles are a series of good items such as coins which you collect to increase your score and various power-ups that come in the form of Atoms or other paper airplanes. Once you get through enough levels, you get to play bonus rounds in which you still have to avoid obstacles but you can collect many more coins (points) than you normally could during a regular level. 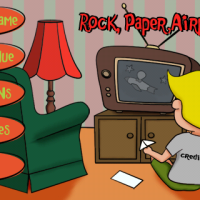 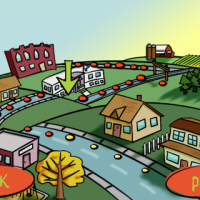 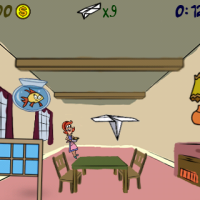 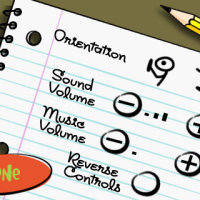 The house that you are flying through has obstacles floating all over the place as if there is no gravity, so it makes for a good challenge to stay clear of dangers. If you are up for a bigger challenge, a sliding navigation bar on the right side of the screen allows you to increase or decrease the speed of the obstacles flying toward you. While the game does give you a large bucket of lives, they quickly become lost as the obstacles become harder to avoid.

To go along with the incoming obstacles is background music that goes great with the craziness happening during game play. The entire experience is oddly satisfying and makes for a great gaming session.

Since Rock, Paper, Airplane! uses tilt controls, the game has various options for orientation so that you can find the best playing position. During my trials with the game, I found the controls to be extremely easy to use, especially if you have played any type of tilt-based airplane game before. The game also has options for adjusting sound effects and music volume as you can have your iPod music playing in the background instead.

Overall, Rock, Paper, Airplane! provides a challenging and engaging game play experience that has great music to match the environment. The controls do take some getting used to if you have not played many tilt-based games, but you pick them up pretty quickly. My only concern is that the game play does become repetitive after a while, leading the game to low replayability value.

Rock, Paper, Airplane! is available in the iTunes App Store for $0.99.