Whenever I am on my Mac and I have some spare time, I usually spend it playing games on AddictingGames.com. If you have never heard of the site (you likely have), it is a website that is filled with easily playable games that quickly become addicting.

But that is on my Mac. What about iPhone?

Sub Hunt is an arcade style submarine adventure where the player is an advanced prototype submarine battling enemies through various stages.

Sub Hunt is about survival and destroying the enemy scum!

Your submarine is an advanced piece of machinery that has available 18 attribute upgrades, paid by points gained from previous stages. The upgrades will become essential tools as each stage of the game becomes more difficult than the last.

Your lone submarine has all odds against it as it battles various enemies including Submarines, Battleships, Airplanes, Destroyers, and Aircraft carriers. The Submarines are particularly difficult as they track your movements and then open fire!

The enemy arsenal is also real pretty nasty including such gems asÂ Depth Charges (nasty buggers),Â Mines,Â Bombs, and Torpedo’s. Luckily your submarine will have 13 power-ups and various repair kits to pick up during game play, so that should extend your vessels seaworthiness for a few seconds.

Each stage in the game has a preceding story which works very well in setting up the tone of the stage. The story and corresponding mission is presented in text before you begin the battle. Sub Hunt comes with three difficulty levels that may be unlocked as you progress through the game. If things get to hot to handle, you can always exit and the game will automatically save for later play.

After each successful stage, and successful is measured by the amount of enemies destroyed while staying alive, you will get points and a Military rank as commendation. These points can then be used to upgrade your submarine. So, make sure to destroy everything! 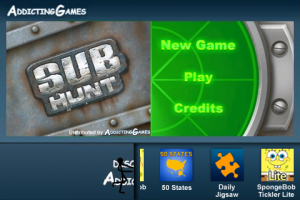 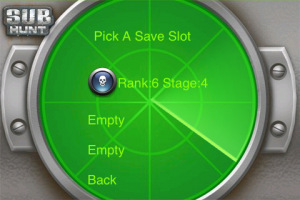 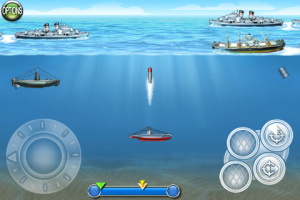 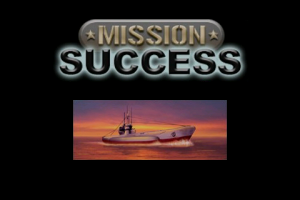 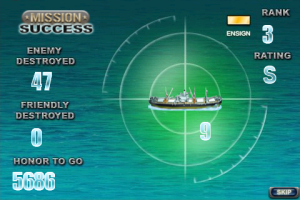 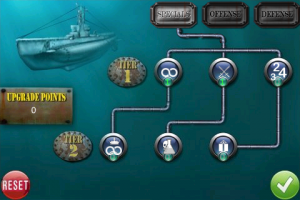 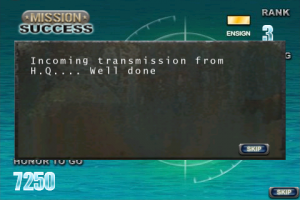 The controls are very easy and very flexible. The player can choose between three control schemes which are all essentially variations on the D-Pad. This is located on the bottom left corner and will be used to move your submarine. You can move up, down and forward but not backwards, so be aware of your six o’clock.

Occasionally the submarine will fall behind your D-Pad control making it hard to see due to your thumb placement, but the game has an innovative system of pointing out the location of the sub using two intersecting lines. I was extremely impressed by this.

On the bottom right corner, four buttons serve asÂ yourÂ firing control. Those buttons consist of one button for vertical fire, one button for horizontal fire, and two buttons for power ups and repairs.

Sub Hunt requires minimal menu navigation since the game is simple and easy to pick up, which was appreciated. 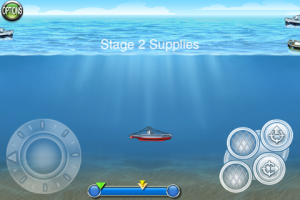 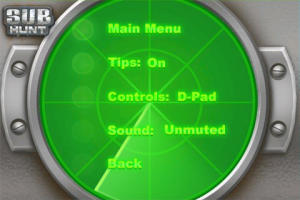 A variety of battle music fills the background as you are playing and the music is mixed in with great missile swooshing and sonar sounds. Although, water and explosion noises would have been a great addition.

Visuals also rank up there nicely with sinking and burning ships and small damage visuals as your submarine takes hits. The entire experience is quite epic.

I was hoping to be able to use my own music during game play (Call Of Duty theme) but accepted the fact that epic battle music and sound effects beat my own music any day. 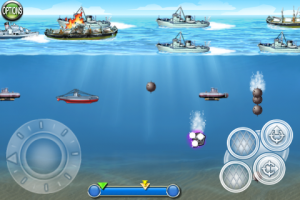 Sub Hunt delivers a very quick to pick up and immerse game play experience that is difficult to deliver at the given price point. The game offers great features with comfortable controls mixed with amusing visuals. The game won’t allow you to use your own iPod music, but instead provides great battle music and epic torpedo and sonar sound effects.

Sub Hunt is available on the iTunes App Store for $0.99.

You can check out a video of Sub Hunt in action here.