Make use of your accelerometer in this physics-based iPhone/iPod Touch game.

Tumbles is a highly-addictive physics-based game with great graphics and a fantastic in-game soundtrack.

Tumbles challenges players at popping every ball on the screen. This can be done in various ways with various power-ups but the basic action is simply tapping on the ball.

Each ball that is popped gets players points and multipliers are available. However the catch is that for every second (time) players are not popping a ball (before the end of the round), they lose one point.

Tumbles includes four distinct game modes that are guaranteed to provide hours of entertainment and give players a variety of in-game challenges and experiences.

The game modes include Classic, Challenge, Blitz, and a Multiplayer mode that allows users to play against another player via Bluetooth.

Since it is difficult to understand the game by just looking at the photos, players will be happy to know that Tumbles includes a full interactive tutorial to get players set up and going into the game.

Tumbles also includes full Plus+ (like OpenFeint) integration that gives players 15 awards to achieve and seven leaderboards to track their scores on. 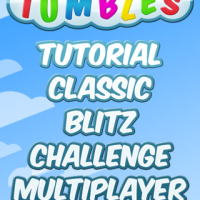 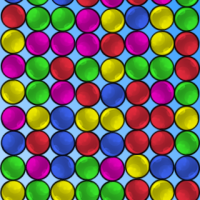 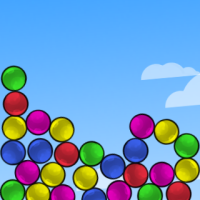 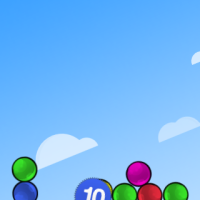 Game navigation is very simple with only a single option selection to mute the sound. All other selections relate to game play.

The controls during game play are a lot of fun and very easy to understand. To pop a ball, users simply tap on it. But users may also tilt the screen to change the orientation of gravity.

Rotating the device causes the balls to roll around along the edge of the game play area and allows players to more easily match identically colored balls together (one method of getting a score multiplier).

Game play visuals are very nice and polished and are not overly or under done. However it was the in-game music that really caught my attention.

The in-game soundtrack is cheerful but not in a childish way. The music is very well done and is rather amusing when matched to game play.

However players need not listen to the preloaded game music as players may opt to listen to their iPod music. While I recommend keeping the in-game music because it goes very well with game play, the choice is nice to have.

Tumbles is available on the App Store for $0.99.