Get Your Spy On – Spy vs. Spy Now Available For iOS

One of my all time favorite classic games – and a game that frustrated me to no end – is now available for your iOS devices. Calgary’s Robots & Pencils have brought the classic Spy vs. Spy to your touch screen.

The game of course is based off the cartoon in the Mad Magazine comic. I remember playing this for hours on the Apple II. What’s great about this iOS version is you can play the retro game in all its pixelated glory. 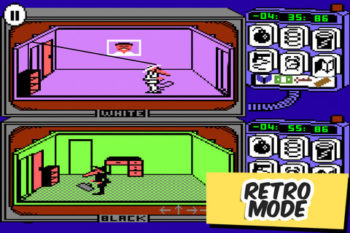 It’s also been updated to be enjoyed on your Retina display device as well.

The premise is simple. Find all the hidden items before the opposing spy and get to your plane — oh, and make sure to plant some booby traps along the way just to frustrate your opponent.

Here’s my video review, and please don’t laugh. I’m still as bad as I was all those years ago.

Robots & Pencils has done a great job porting over Spy vs. Spy and updating it for your iOS devices. You have the eight original embassies to make your way through with the addition of 16 more. And for your added enjoyment, it offers online and local multiplayer support. So you’re sure to get a lot of replay value.

If you were a fan of the original, you’ll love this version. And if you’re new to the game, you’ll be hooked in seconds.

Google is celebrating the holiday season with a handful of new features for Android smartphones and smartwatches, with some aimed at helping users get in the spirit. Here’s a quick rundown of all the new Android features rolling out this holiday season. Add holiday cheer to your photos and messages Heading into the holiday season,...
Usman Qureshi
7 days ago