The epic battle between Apple and Google continues, as the latter released its Chrome browser in the App Store last week. Which will emerge victorious in the battle for iOS browser supremacy? Our review will attempt to answer this question, after testing and using Chrome for the past week.

Upon launching the application for the first time and surpassing the obligatory “take a tour of the app” intro, the first thing I noticed is the impressive interface. The layout and feel of the app is very cool, almost futuristic. If this is Google’s attempt to make Chrome seem like the “next gen” browser, then they definitely nailed it.

The tabbed browsing interface is slick. Clicking the tab icon in the upper-right displays all open tabs in a filing cabinet type of style. This is referred to as the “tab switch” mode. From here you are to able flip through the open tabs as one would do when sorting through a filing cabinet. 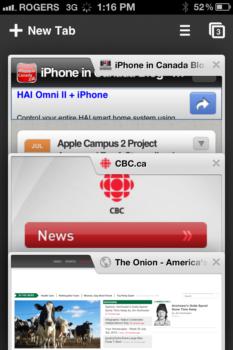 Now on to my favourite feature – the ability to cycle between tabs using gestures. Using your finger, swipe to the right and left to cycle through the open tabs. To close a tab, swipe while in tab switch mode. These motions feel very fluid and natural. This functionality is definitely something Safari needs to adopt (errr I mean, “borrow”.)

Just like its desktop counterpart, Chrome for iOS also uses the address bar for both URL entry and search functionality, a feature that I’m a big fan of. Google refers to this as “Omnibox.” As you type into this box, Chrome will attempt to make some “highly relevant” suggestions on what you may be trying to type.

These suggestions are based on your bookmarks, search history, and “very probable” search results. This just makes so much more sense than Safari’s method of having two different boxes for these. 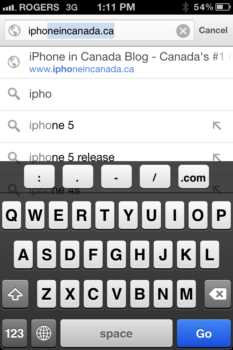 Chrome also goes “to the cloud”. Sign in with your Google account, and you’ll be able to sync your bookmarks, Omnibox data, and currently-open tabs, with Chrome on your other devices.

While this is a nifty feature, bookmark-syncing is something Safari already has (via iCloud,) and the syncing of tabs seems to solve a problem that doesn’t necessarily exist. I’m not sure why this is a useful feature?

Don’t want your friends to find out you’re a closet Glee fan? Go Incognito! Chrome makes it easy to create incognito tabs, which means your browser and search history isn’t tracked while you surf. 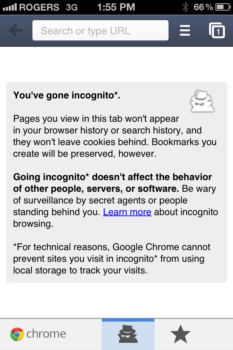 We’ve discussed the main pros of Chrome, now on to some cons.

According to this performance test conducted by MacLife, Safari tests much better in most of the major categories for speed. Google blames this on “platform specific technical specifications”. Sounds like an excuse to me!

So is Chrome really a viable replacement for Safari? The short answer is no, even despite all the slick features. The main reason being that iOS doesn’t allow any non-Safari browser to be the system default. Meaning all links opened from other apps – Mail, Twitter, etc. – will always still open in Safari. This lack of native OS support really hurts Chrome. (UPDATE: Unless your phone is jailbroken, of course. There is a Cydia tweak that allows you to change the default browser.)

Despite these cons, Chrome is the best secondary browser alternative to Safari, much to Apple’s chagrin. Some of the notable features may indeed be enough for some users to warrant the switch.

Will you be a Chrome iOS user?

[via MacLife, The Chromium Projects]