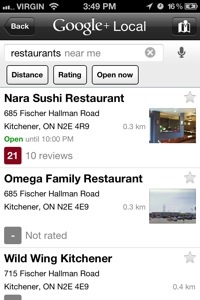 Google has updated their iOS app, Google Places and is now called Google+ Local. Added to this update is speech recognition, an improved interface and Zagat reviews.

The speech recognition is quite good and my verbal requests for things such as “Japanese Food” and “Coffee Shops”. I did manage to find a bug in the app. At least half of the time after I exited the app and re-opened it, speech recognition wouldn’t work. This was easily fixed by removing the app from memory and opening it again.

The addition of Zagat reviews has limited value in Canada. The city where I live in featured no Zagat reviews. This didn’t come as a surprise to me as I don’t live in a huge city. I was able to find Zagat reviews for restaurants in Montreal, Toronto and Vancouver. Many of the businesses do have ratings based on reviews from the public and an overall score is displayed in the listing. Each listing provides a button to “See on Map”, “Call”, “Directions to Here” and “More Info”.

The interface is clean and when you open the app you are greeted by icons representing the most common searches such as restaurants, coffee, ATMs and gas stations to name a few. The searches are fast but unfortunately the returned results aren’t always accurate. A search for “Restaurants Near Me” with a rating of “26 – Extraordinary” included a museum, an orthodontist and a limo service.

Overall this app failed to impress me. It does pretty much the same thing as Yelp but only half as good. The addition of speech recognition really doesn’t add that much value and the overall score Google+ Local assigns to entries is confusing to say the least. I would skip this app in favor of Yelp.

I would love to hear what you think. Do you use an app that is similar to these ones?