Now this is what you call the power of the iPhone. Health Canada has recently approved an app to allow doctors to diagnose a stroke–right from their iPhone.

The app is called Resolution MD, developed by the University of Calgary that allows doctors to view 2D/3D brain and diagnostic images right on their iPhone. Studies have shown the iPhone as a workstation works very effectively:

Diagnoses made using the hand-held device and at the hospital workstation were essentially the same, said Dr. Mayank Goyal, director of research in the U of C’s department of radiology and one of the neuro-radiologists in the study.

“What we found was our ability to make correct accurate diagnosis on the iPhone was very high,” Goyal said.

By being able to diagnose a stroke immediately within the first few minutes is crucial, rather than having patients wait for long periods for an accurate assessment. ResolutionMD works by having the iOS app connect to a secure third party server to download information. This allows for no confidential info to be stored on iPhones or iPads. Doctors get info in real time. 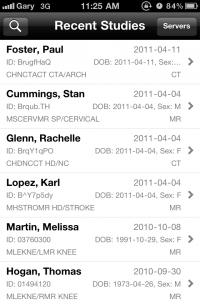 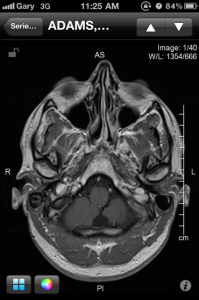 This truly is the future of mobile medicine. Physicians can now diagnose patients from anywhere, and with high resolution displays like the Retina Display, it has enabled images to be displayed in a clearer fashion. This app has been tested repeatedly, and its effectiveness has been the equivalent to a medical workstation:

In the recent study, neuro-radiologists looked at 120 recent brain scans and 70 head scans on an iPhone and on a medial diagnostic workstation.

The study, published in the May 6 edition of Journal of Medical Internet Research, showed the iPhone app was between 94 per cent and 100 per cent accurate, compared to a medical workstation, for diagnosing acute stroke.

You can download ResolutionMD Lite to get a preview of how the app works. It’s actually pretty impressive.