How to Use your iPhone 4 as an LED Flashlight: Springflash

The iPhone 4 has many new features and upgrades compared to its younger sibling the iPhone 3GS. One of the most anticipated features was the inclusion of an LED flash for taking pictures in low light. I’ve already discovered the camera can still capture images in extreme low light conditions without flash. But for those “shots in da club,” flash photography is your only option.

What about other uses for your LED flash? Why not use it as a flashlight? You can do so easily by downloading any free LED flashlight app in the App Store. You’ll find a plethora of free ones. Just search for them.

However, if you have a jailbroken iPhone, there’s a new tweak called Springflash that will perform the same task but in a fraction of the time. There is also a SBSettings Springflash toggle to make life even easier. 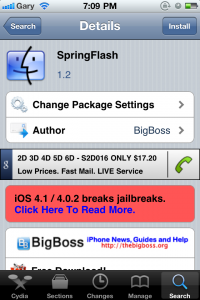 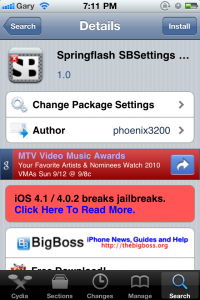 So, in summary, if you want to use your iPhone 4 LED as a flashlight, you have three options:

Option 1. Download a free flashlight app from the App Store.

Option 2. If you want a faster method of activating the LED flash, install Springflash and the SBSettings Springflash Toggle via Cydia. 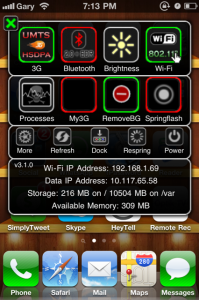 The LED flash works pretty well as a flashlight in darkness–it’s really bright. I can find a plethora of uses for this LED flash, but one thing is for sure your battery life will be affected!

Are you using any flashlight apps with your iPhone 4?