On Tuesday Apple released an update to their MacBook line up. The new updated MacBook caught my eye as as I explained in my previous post. After getting my first real taste of OS X through the iPhone, I started to seriously consider switching over to a Mac! You hear people talk about how Apple is a gateway drug to more Apple products. When I heard this, I thought to myself “that’s crazy”…now I am having second thoughts, LOL!

Yesterday the Pacific Centre Apple Store did not have the new MacBooks in stock during the day. However, later in the evening they received a shipment of these new MacBooks (X1Zero was camping out waiting for one)! So today prior to visiting the store I called to inquire if there were any MacBooks in stock and on display. The answer I got was YES they are in stock, but not on display for you to dirty up with your greasy fingers.

After hearing the positive news I went down to the Apple Store and purchased my first Mac, a new aluminum MacBook (I cancelled my online order just in time on the phone after arriving at the store). I went with the base configuration (2.0GHz/160GB/2GB) and had an education discount to bring the price to $1349. Why didn’t I go for the higher end model for $300 more? Well, the illuminated keyboard would be nice but honestly how often do you surf the web in dimly lit areas? Also, since these new MacBooks allow for easy access to the hard drive I can always upgrade that myself in the future.

I think using the iPhone has prepared me for what OS X has to offer. I immediately noticed the similarities in icons, settings, and the intuitive features that are a signature of Apple products. At first though, I felt a bit lost since I was so accustomed to Windows XP all this time. Where’s the right click (figured that out later on)? How do I maximize windows? No Start button?!

Of course, after spending my evening on this beautiful notebook and getting ideas on what programs to download via Twitter, I am starting to feel a lot more comfortable using OS X. I must admit the system feels very rock solid, as opposed to Windows XP. I always had a feeling that Windows XP would crash on me whenever I was doing something important and get that dreaded BSOD (blue screen of death). Leopard feels very good and everything has been relatively smooth and lightning fast. Granted, my MacBook is pretty barebones right now so I’ll see how this unit fares when I have a bunch of software and other files are on the machine.

The Design of the MacBook Itself: It’s Pretty Darn Nice

The aluminum unibody structure is very strong. Holding the laptop with one hand does not result in any squeaking noises or bending–this MacBook is extremely well built. The glossy screen makes images pop out and I did not find any issues with glare (my Dell 700M had a glossy screen so maybe I’m used to it by now). The keyboard is nice and easy to type on. The keys are spaced out fairly well and soft with a slightly firm feel. 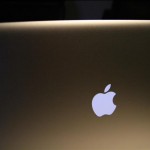 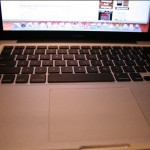 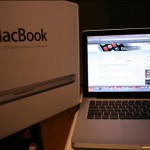 The new glass trackpad does not feel like glass (where is it?!). Since there are no more buttons, you have a lot of retail space to move your mouse around with. The trackpad button covers about two-thirds of the area and sometimes I made the mistake of trying to push near the top to no avail. After having the unit on for more than five hours, no heat has been emitting from the keyboard area, the LED LCD, or the palm rests itself. The aluminum is going to keep this puppy super cool or pass on the heat. So far so good!