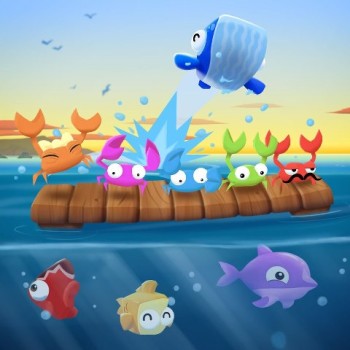 Fish Out of Water is the latest effort from the folks over at Halkbrick Studios. They’ve released such hits as Fruit Ninja and Jetpack Joyride. Fish Out of Water, while nothing like these two classics, does have one thing in common. It’s insanely addictive.

The concept is simple, fling one of the six sea creatures along the water to see how far they can travel and how many times they skip. Just think skipping rocks in the water.

There are six marine animals you can choose. Each one has its own unique attributes and will react differently to the water conditions, weather and angle at which you launch them. Each time, you get to throw three of the six seas creatures, and while you may think throwing them the furthest is the main objective, you need to balance that with getting as many skips as possible.

Once you’ve finished launched the three, you are judged by five crabs. Each one will give you a score from 0 to 10. Now don’t worry about any judging controversy, each crab is judging you on a specific criteria, such as distance and skips.

To help you get more distance and skips, you can use the power boost. You can get more boost power by collecting the little yellow pellets throughout the game.

To add even more fun, there are three missions to complete every level. These missions include skipping a set number of times with a certain character or reaching a set distance. Some are more challenging than others. Once you’ve completed the three missions, you collect crystals. They can be put together to give you special boosts.

And if all that isn’t enough, you can create or join a league to compete against others. This way you can see how your score stacks up against other players. I have set up an “iphoneincanada” league.

While Fish Out of Water may seem simple on the outside, the game is a lot of fun and highly addictive. Let me know what you think, and make sure to post your best scores.