If you haven’t tried the free Meebo IM app, you’re missing out on one of the best IM apps available for the iPhone. The Meebo team has been hard at work and just released their 1.2 update which allows users to send pictures via chat. Pics can be taken from the camera or the camera roll.

Here are the details of this latest update:

Features:
* ability to send and receive photos
* ability to IM someone not on your buddylist
* support for non-US keyboards (e.g. pinyin, kana)
* preference to hide offline buddies

Many bug fixes including:
* crash on registration after trying to sign in
* crash for group names starting with @ sign
* Facebook usernames showing up as numbers
* some network icons not being displayed
* getting network interruption while searching buddy list causes display issues
* unable to resend failed IM
* disappearing data on add buddy form
* handle more error cases when add account fails
* “talking to meebo” bar pushes down chat and makes it hard to see last line
* pressing send while cursor is in the middle of an IM inserts a line break
* text input area doesn’t resize properly with some emoticons
* euro symbol is escaped
* various display issues when changing to/from landscape mode
* smoothly animate closing of chats 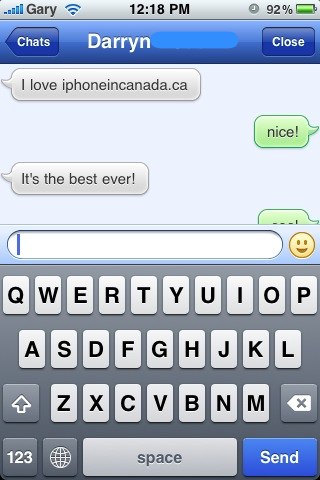