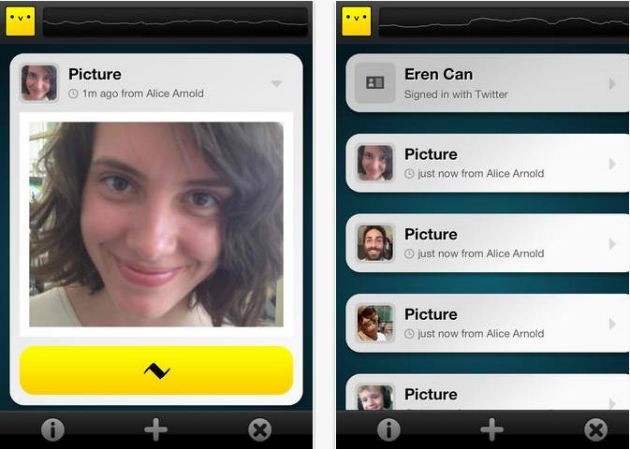 It’s pretty rare in this day and age that I read the synopsis of an app and say (out loud, no less,) “What? No way! Now that is cool!” In today’s crowded App Store, it’s rare to come across an app that utilizes technology in a way I’d never seen or heard of before. But that’s exactly what happened when I read the synopsis of the new app Chirp, created by developer Animal Systems.

You just need your iPhone to “Chirp!”

Yep, that’s the same reaction I had at first too. So allow me to explain.

First, you download and open Chirp. (Did I mention it’s free?) Then, you tell one or more people to do the same. Then, pick something you want to share. This could be a picture, note, or web site URL. Finally, press the yellow button. Chirp will then send the content to everyone around you within earshot. Your picture or words will then appear on their screens! COOL! NEAT! NIFTY! (And a bunch of other adjectives that sound nerdy.)

So how does it work? Basically, Chirp does three things: 1) Uploads your content to the cloud. 2) Creates a unique sound (i.e. chirp) for the content. 3) “Sings” the sound to any other devices within earshot. The sound is then received by other people’s phones, decodes it – and voila! The picture is received.

It even works when one or both devices have no Internet connectivity. The sound can be sent and received, and then the content is downloaded the next time there is a connection. While I haven’t tested this, apparently this will even work in noisy environments, since the tones generated by Chirp are specific to the app itself.

Could this technology become a universal standard some day? Perhaps. Are there endless possibilities for its use? Definitely! Here’s an example: You are watching a TV show. The show plays a chirp. Every viewer of the show would then receive that content!

I thought of another example: You’re at a Tragically Hip concert (in case you can’t tell, I’m a fan.) You snap the perfect pic of Gord Downie belting out a tune. You could then share that pic with everyone else at the show!

And those are just a couple examples.

So what do you think? Have you used Chirp? Does this technology have the potential to be something great? Or is it just another content-sharing app?

We welcome your thoughts. In the meantime, I’ll be chirping!