For those of you who use the PayPal iPhone app, you will be pleased to know that the app just received a major update. The interface has been revamped and new features have been added, including the ability to use the Bump iPhone app to send payments.

Here’s the description on the latest update:

PayPalâ€™s mobile money application is
the faster way to send money with your iPhoneÂ® to friends and family anytime, anywhere. Itâ€™s much easier than going to the ATM to withdraw cash, writing checks, and sending gifts the traditional way. And you can manage your PayPal account right from your mobile device. All of this with the security and protection you get from PayPal.

What’s New In This Version:
+ Brand new look and feel!
+ Bump: Easily start by bumping iPhones.
+ Withdraw funds from your PayPal balance.
+ Request Money: Get paid faster, itâ€™s the easy way to ask for the money you are owed.
+ Split the Check: Instantly split the bill, calculate tip, and request everyoneâ€™s share.
+ Collect Money: Ask for contributions from a group for an event, gift, or cause.
+ Set Reminders: Never miss rent or a bill.
+ Refer the app to a friend

The new update looks really nice and retains the clean interface. It adds more features than before and is easy to use. Not sure how often I’d be using the Bump functionality but it’s a great addition for existing Bump users. The PayPal app is free in the App Store. 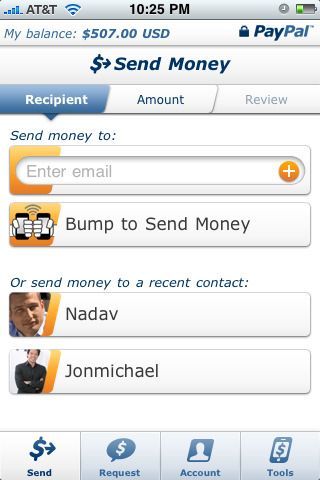