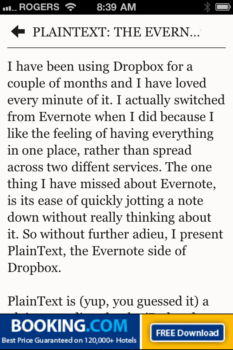 I have been using Dropbox for a couple of months and I have loved every minute of it. I actually switched from Evernote when I did because I like the feeling of having everything in one place, rather than spread across two diffent services. The one thing I have missed about Evernote, is its ease of quickly jotting a note down without really thinking about it. So, I present PlainText, the Evernote side of Dropbox.

PlainText is (yup, you guessed it) a plain text editor for the iPad and iPhone/iPod touch. Featuring a very minimalistic design the application really gets out of your way when you want to type, creating almost the same feel as Omm Writer. 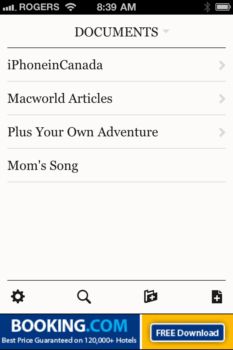 Now there aren’t many revolutionary features because it is just a plain text editor, but one feature that I believe should be in more applications, is Dropbox sync. Once logged into your Dropbox account, PlainText will create a folder called “PlainText” in the top level of your Dropbox folder. In there will be every note you’ve created with PlainText, including the subfolders.

I think the specialty of PlainText is that if you are connected to the Internet (WiFi/3G) while typing, PlainText automatically syncs every few seconds! Now don’t worry it’s only plain text and is definitely not hogging up your data plan. The reason I love this is because if you’re in the middle of typing and need to leave your device for a second, you can be confident that no matter what, your most recent changes are already on Dropbox before you’ve even left your seat.

If you’re a heavy graphics and visual type of person, maybe the whole plain text format isn’t for you. However, if you’re like me and have missed out on being able to write a note and sync it as fast as possible, you should definitely give PlainText a try. If you love it enough you can even pay ($1.99) to remove the ads. Though if you enjoy reading ads than you should pay it anyways, if not to support the developers.

So, are you an Evernote user or a Dropbox user? Or both?