Today I have a very sleek app up for review called “Currencies”. It is a currency conversion application for the iPhone or iPod Touch.

Currencies takes the usual boring task of money conversion and makes it very intuitive and simple. The app comes with a fantastic user interface and converting currencies is done very quickly and efficiently.

Currencies currently supports over 75 currencies and comes with a few neat features. Aside from the easy user interface, the conversion rates within the app will update when the app is launched but you may also set a time interval ranging from every hour to every day or simply the option to shake to refresh which adds a little fun to the application by shaking your device to refresh the conversion rates. 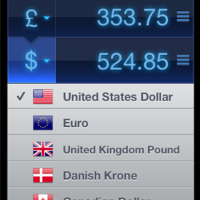 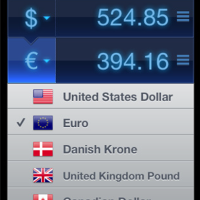 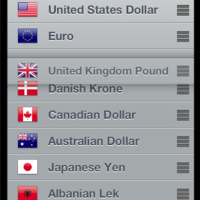 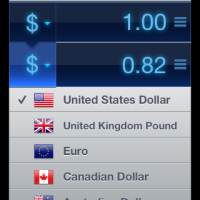 The above images detail the great user interface, plus some of the included monetary conversions, including the all powerful Canadian Dollar vs American Dollar…*Ahem*….Yea right. To enter an amount to be converted, you simply tap the field where the numbers are and to change the conversion type, you tap the small arrow next to the currency symbol to make your selection.

However, since Currencies does refresh the currency rates, that does mean the app requires an internet connection whether it be via your wireless data plan or WiFi. So if you have an iPod Touch or an internet-less iPhone or iPhone 3G, you will want to access local WiFi atleast a couple times a day to keep your rates up to date.

Currencies was just recently released and can be picked up in the iTunes AppStore for $0.99.

***If you enjoy reading my posts, please Support X1’s Corner by click here!***