Ticket to Ride began as a hugely successful board game, winning the 2004 Spiel des Jahres (German for Game of the Year) and selling over 2 million copies. Earlier this week, Days of Wonder (the publisher) made the jump to the iPhone and iPod touch with the release of Ticket to Ride Pocket. 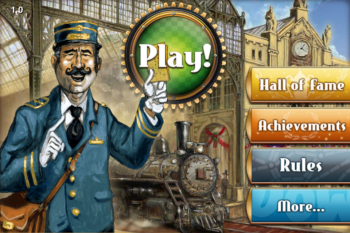 If you haven’t played Ticket to Ride yet, it’s a very simple strategy game for 2-5 players. It’s a railway track-building game, where you collect cards that allow you to build tracks between cities on a 1910 map of America. You score points depending on the length of the track; the longer the track, the more points scored. The twist that makes the game work is the route cards: each player has pairs of cities that they must connect. Do so and you obtain extra points, failure results in those points being subtracted from your final score. The player with the most points wins. 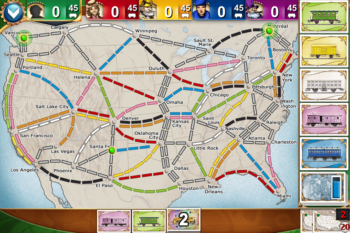 The iPhone app play is directly translated from the board game, complete with atmosphere and easy playability. The cards and board have the same color and design, and the touchscreen is used to great effect. It’s a nice and thoughtful example of the board game being ported to a digital medium.

The app does lacks a couple of features that I would have liked to see. Notably, there is no Internet play, so you won’t be able to challenge friends or strangers via Game Center. It sort of makes up for it by supporting both Wi-Fi and Bluetooth connectivity for playing with other iOS devices in range. It also has a Pass & Play feature for playing with others on the same device. 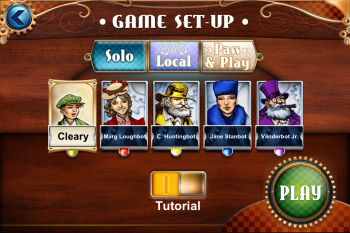 The downsides: The AI isn’t great. The computer just seems to select one route after another and completes it; an amateur strategy. And there are some UI problems. The game puts your route cards in two small piles—completed and in progress—in the lower right-hand corner of the screen, and toggling between the two piles can be finicky. Also, some of the information about the other players is hidden unless you tap on the player, or it’s that player’s turn. It’s an economical use of space, but does adversely affect strategic play.