The Electronic Arts (EA) iPhone developers are on top of their game. They keep on pumping out some amazing games for the iPhone/iPod Touch that really pushes the iPhone to the limit. I’m currently addicted to Tiger Woods PGA Tour, but it looks like I have a new addition to my list: ROCK BAND!

Rock Band for the iPhone is Finally Here–And It’s Awesome!

Let me be the first to say that I am by no means a Rock Band junkie like some of you out there. I’ve played Rock Band on the XBOX 360, PS3, and Wii, and I’ve enjoyed it every single time. However, my brain doesn’t work properly for me to get past the “easy” stages.

Rock Band for the iPhone mimics the exact same menus and sound effects like its console versions. You can select from four instruments to play from: guitar, bass, drums, and vocals. Playing the game from the get go was super easy. The iPhone 3GS renders the graphics beautifully and there’s absolutely no lag whatsoever. 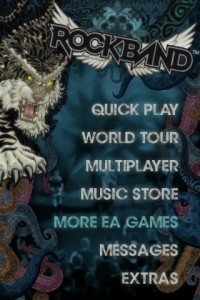 Rock Band for the iPhone Uses Your Thumbs

The layout for playing either the guitar, bass, or drums is through four “buttons” on the bottom of your iPhone’s screen. It’s best to use your thumbs to rock out. I quickly launched a warm up track on EASY. I decided to go with ‘Hanging on the Telephone’ by Blondie. 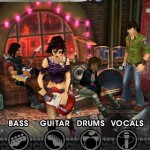 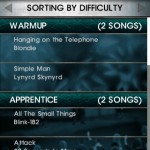 Rock Band for the iPhone really brings out the power of the much more powerful iPhone 3GS. The graphics look great–it’s like I’m playing a console version in the palm of my hand. The layout on the screen looks just like the console versions. You can see the band in the background and the buttons and everything else are 3D and look great.

The iPhone’s touchscreen responds very well to the tabs that come flying your way (is that what they’re called?!). Even when I missed multiple notes, the sound effects were exactly the way I recalled from my previous Rock Band experiences.

When you’re rocking out, the games takes advantage of the iPhone’s accelerometer to get you higher scores. When you see the iPhone icon show up, you just bend the iPhone down to get you those extra points–uber cool! I’m not even a Rock Band fan and after playing this iPhone version for 2 minutes I’m already hooked. 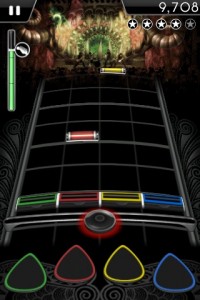 You can connect with up to four friends and play via Bluetooth. You can even jam online with random players, or invite your Facebook friends (and get Push notifications of when to play–like when you’re bored at work). Of course, you can also purchase extra tracks within the app itself. You can earn points and upload your scores online the worldwide leaderboard.

Some extra facts:
– Play along with 20 legendary songs from great bands like Smashing Pumpkins, Lynyrd Skynyrd, Foo Fighters, Blink-182, The Beastie Boys, and more!
– Start out playing in grungy dives and work all the way up to stadium-rock stardom
– Collect rewards and achievements that provide replay value and depth to even the most experienced Rock Band veterans

For the price of $9.99, Rock Band is one of the more expensive games out there. However, this game has been ported over to the iPhone by EA, so you know it’s going to be rock solid. Coming from someone who doesn’t play Rock Band on consoles, I found this game to be fairly easy to start and play. The graphics, sound, and game play is excellent. If you love Rock Band and you have an iPhone, $9.99 for this app is a no-brainer.

Here’s a video of the gameplay from TouchArcade: