Remember the whole SNAFU regarding the Skype iPhone app and how it wasn’t available in Canada? The only way to download Skype was to go through a US iTunes account. But that has now changed because SKYPE IS NOW AVAILABLE IN THE CANADIAN APP STORE!

That’s right folks! Skype for the iPhone is now available in Canadian iTunes! Here’s what Tom Yeung from Skype had to tell CBC.ca:

Skype’s Canadian iPhone delay was the result of a licensing issue over how it plays sound. The application has already been available for other mobile phones, including those running Microsoft Windows, for some time.

A territorial restriction on an audio codec â€” a program for compressing data used specifically by the iPhone â€” was the sticking point that prevented Skype from rolling out to Canadians in March, at the same time as the rest of the world, Yeung said.

“Unfortunately Canada was not part of the allowed geography at the time, but that’s been taken care of,” he said.

So you know what this means now for Canadians?

For iPhones right out of the box you can…
-Sign up for SkypeOut credit to make Canadian/USA long distance calls for 2 cents/minute.
–Sign up for a Skype subscription plan and make unlimited calls to Canada/USA for $3/month.
-Download Skype from Canadian iTunes instead of going through US iTunes

If you have a jailbroken iPhone…
– install VoIPOver3G or 3G Unrestrictor to make Skype calls over 3G and bypass the WiFi restriction. 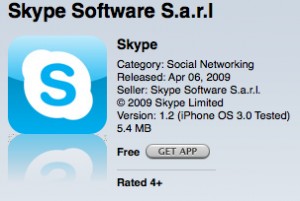 There you have it! Canada now has Skype in Canadian iTunes! Click here to download Skype now! Booya!