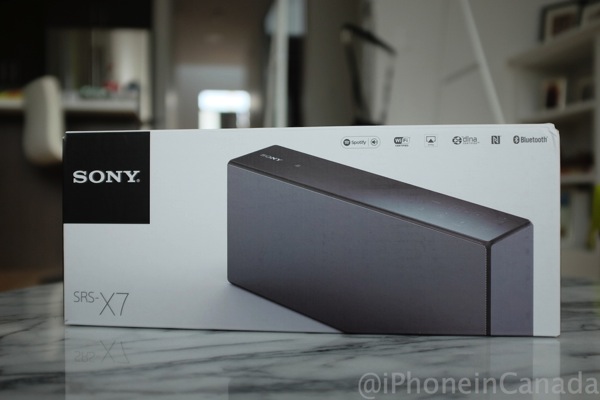 Sony this year released a line of portable Bluetooth speakers and the SRSX7 model comes in a sleek looking design that also packs a powerful punch to keep tunes flowing wirelessly. The company sent us a speaker to check out—let’s see how this AirPlay speaker fares in our tests. 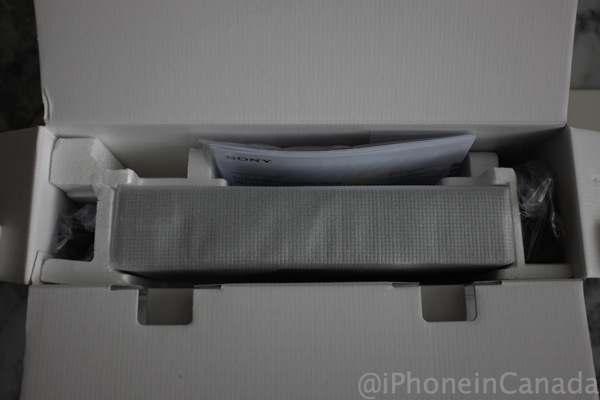 The SRSX7 out of the box comes with an AC power cord and power adapter, quick start guide, instructions and a warranty card. The speaker itself weighs 1.9 kilograms (4.3 pounds) and feels quite sturdy and premium for its size, given the $299 CAD MSRP. 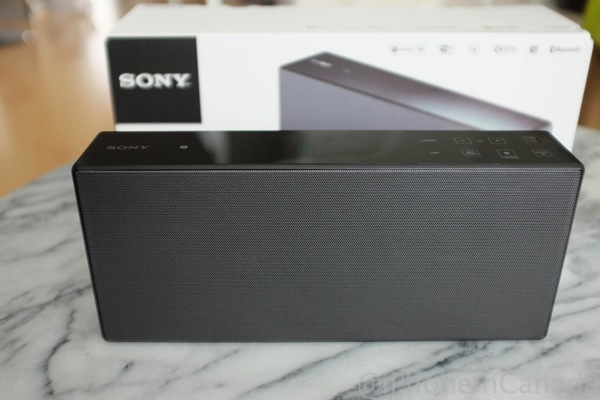 The speaker brings 32 watts of stereo sound as there’s a 2.4-inch subwoofer with dual passive radiators that can actually fill up a room quite well despite the unit’s relatively compact size, bringing 2.1 surround sound, able to stream up to 6 hours with the built-in battery. 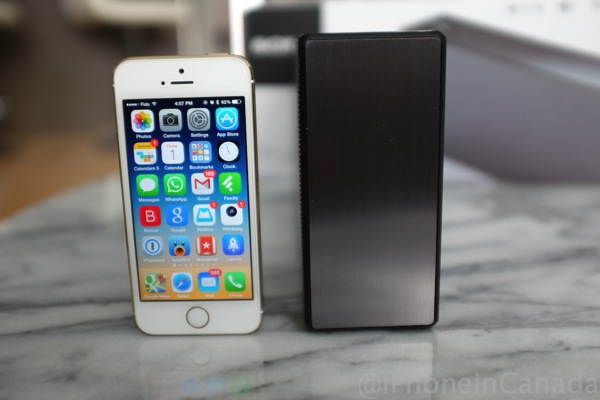 The design of this speaker looks pretty nice—the simple rectangular design comes finished on top with a piano black gloss, where touch-sensitive buttons preside (aside from the power button). The design might be too simple and bland for some, but the minimalism looks good in my opinion as it blends in nicely on any shelf or bookcase. 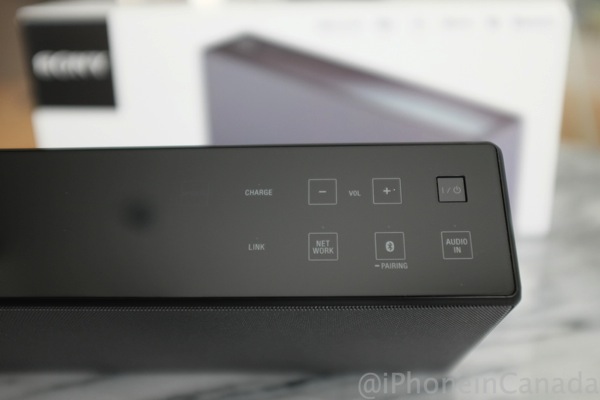 The buttons on top include volume, network, Link and Bluetooth pairing touch buttons, while on the back there’s an Audio In, LAN, USB port for charging your device, a WPS button, reset button and Network on/off switch. There’s also a wireless antenna which flips out—so when you want to stream to the speaker over Wi-Fi, you’ll have extended range. On top of being a wireless speaker, you can also use this as a wired speaker too. 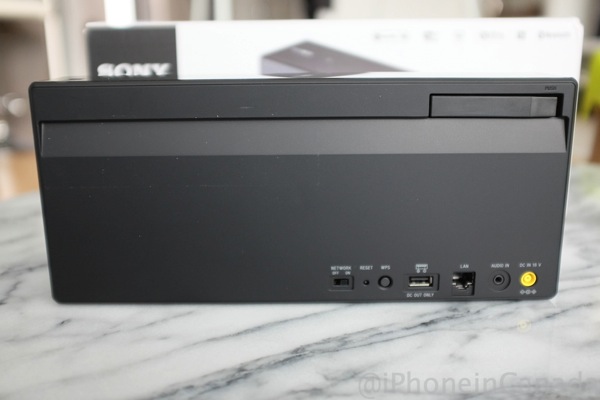 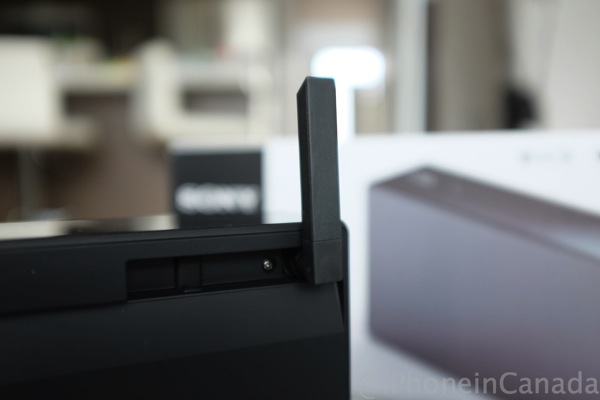 Linking my iPhone 5s to the SRSX7 was very simple. Just connect to the device via Bluetooth in Settings and you’re up and running. From there, the next time you want to stream audio to the speaker from your iOS device or Mac, it’s only a tap away using AirPlay. Those with NFC-capable devices can just tap on the unit to connect.

Users can also use the Sony SongPal iOS app to configure their music source, choose from streaming music services such as Pandora, Spotify, Deezer and TuneIn Radio, plus use an equalizer to customize the sound from the speakers.

Okay, so you know the SRS-X7 looks great—but how the heck does it sound? Well, from our tests streaming music via Songza and some MP3s from our iPhone, the quality was pretty good. Music was able to fill up our living room and the bass produced out of these small speakers would probably wake up your roommate, but wouldn’t go as far as annoying your neighbour (unless you had it on max volume). 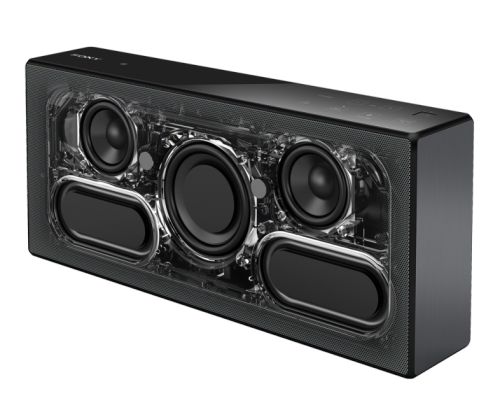 I’m not an audiophile by any means, but I can tell what sounds good to me and if this would be a worthy speaker to use for parties and other social gatherings. Given the speakers size and output, I would definitely think this would be ample enough to play background music for dinners or get-togethers with friends. Bluetooth streaming has its limitations when it comes to sound quality, so a direct connection would most likely bring better sound. 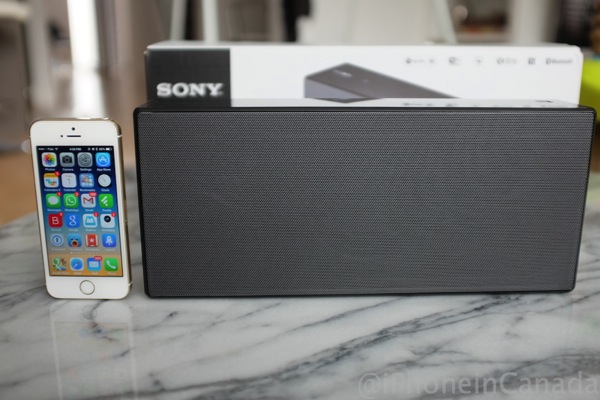 The SongPal app allows users to control the volume on top of managing equalizer settings. The mid-range and high range sounds coming out of this speaker definitely are its advantages, but don’t expect clear booming bass at high volumes, considering the size of this portable speaker.

The speaker turns itself off after a prolonged period of inactivity as part of ’standby mode’ being turned on by default. This is annoying as for a while I had to keep turning the speaker back on to stream music. I had to dig around only to find out it could be disabled via Sony’s SongPal iOS app’s ‘Power Option’ settings.

I attempted to setup Wi-Fi streaming by following the instructions given by Sony’s manual, but they just didn’t work out and I gave up in frustration (not a good sign). The process definitely should be simpler, but then again Bluetooth streaming with AirPlay is so much easier to setup so I would assume most users would go this route.

Overall, the Sony SRS-X7 is a pretty sleek looking portable Bluetooth speaker that makes some decent sound to fill up your living room, while it’s also able to go with you to the beach or anywhere else. The speaker has multiple connection options and can also be used with a direct wired connection, which extends its capabilities.

At a price of $300 CAD MSRP, it’s definitely a higher-end portable Bluetooth speaker. Is it worth it? Based on the compliments we’ve had so far on this speaker sitting on our shelf and the sound coming out of it, we’d say it’s definitely one to consider. Try it out at a store (Future Shop sells it) and listen for yourself to see if it’s worthy for your living room.

Let us know what your portable Bluetooth speaker of choice is in this price range in the comments below!