Sphero’s been making iPhone-connected ball-shaped robotic toys since 2011, and while the company has been very successful with all of their products, they stumbled upon a major hit this year with the launch of the BB-8, a Star Wars branded iPhone-controlled droid.

BB-8 is based upon the droid from the newly released movie Star Wards: The Force Awakens, and was designed with help from Lucasfilm. It combines Sphero’s existing robotic ball technology with the Star Wars universe.

Lucasfilm provided Sphero with details on BB-8, feedback on the design, and the iconic sounds that bring the toy’s personality to life.

In terms of design, the BB-8 consists of a robotic ball, similar to the original Sphero, and a droid head that fits onto the ball using magnets. Under the head, there are a set of wheels that allow it to move around and stay in place on top of the body of the BB-8 while it is in motion. 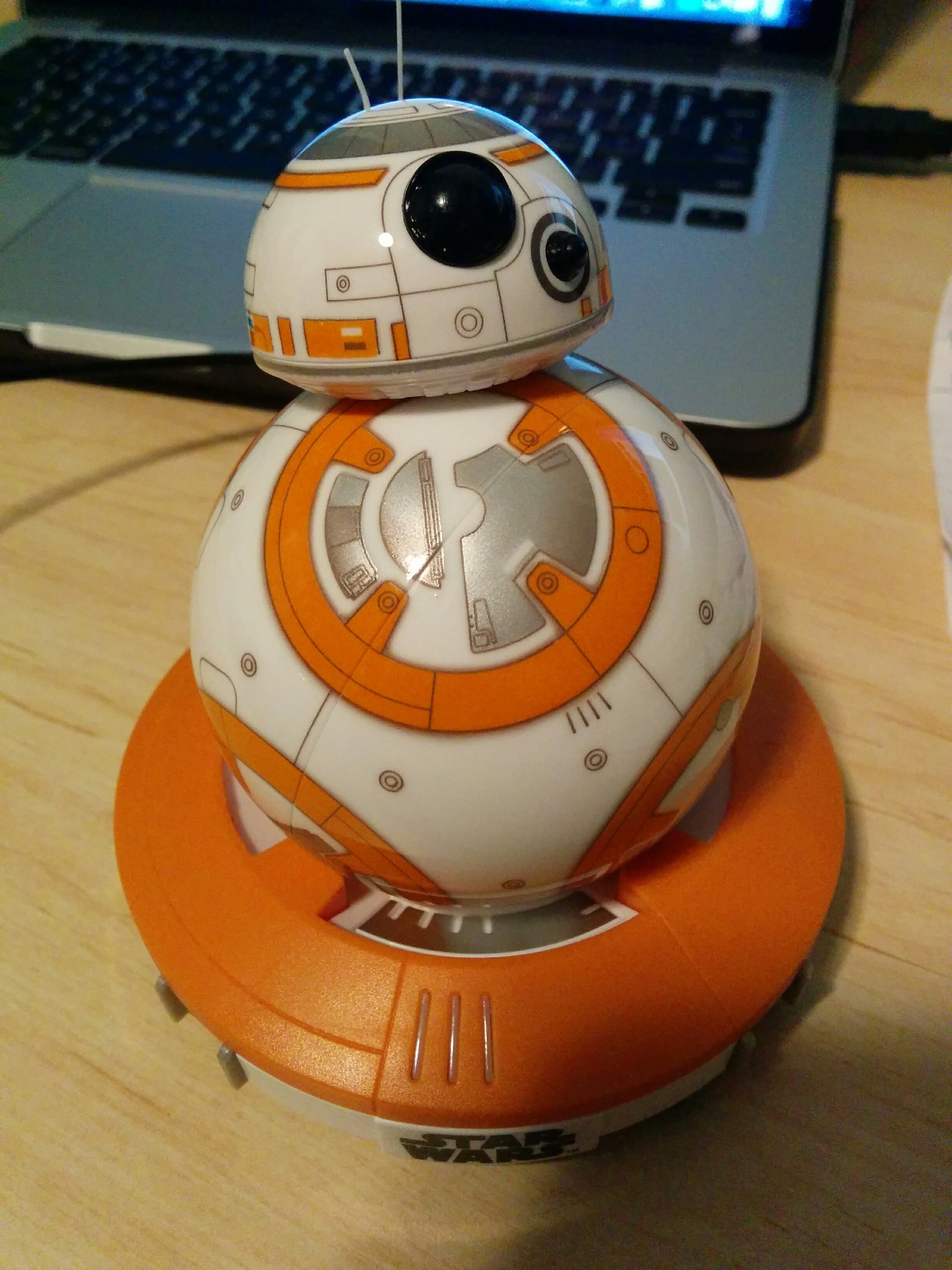 BB-8 is approximately the size of a baseball and fits in the palm of a hand. If you have a Sphero already, the body of the BB-8 is the same size as the Sphero ball. The head is about the size of half a ping pong ball and is adorned with two ornamental antennae.

The body and the head are both made of a smooth plastic and there are LEDs inside that allow BB-8 to light up. The device is built using a very durable plastic that will protect BB-8 in the event that it bumps into any walls or objects on the ground.

Inside the BB-8 is a gyroscope used to determine orientation, electronics and a motor to power it, a set of wheels that make the ball roll, magnets that hold onto the head, and counterweights to keep it all upright. That’s a bit of a simplification of what’s inside, but it basically works by propelling itself with those internal wheels.

BB-8 connects to and is controlled by an iPhone or Android phone that uses Bluetooth to send commands to the ball. It has a 30 meter range and it lasts for approximately 60 minutes on one charge.

Without an iPhone or an Android smartphone, you won’t be able to do much with the BB-8. Even the BB-8’s sounds come from the smartphone, which is a little disappointing. It would be a better experience if the ball itself was able to make the requisite noises. 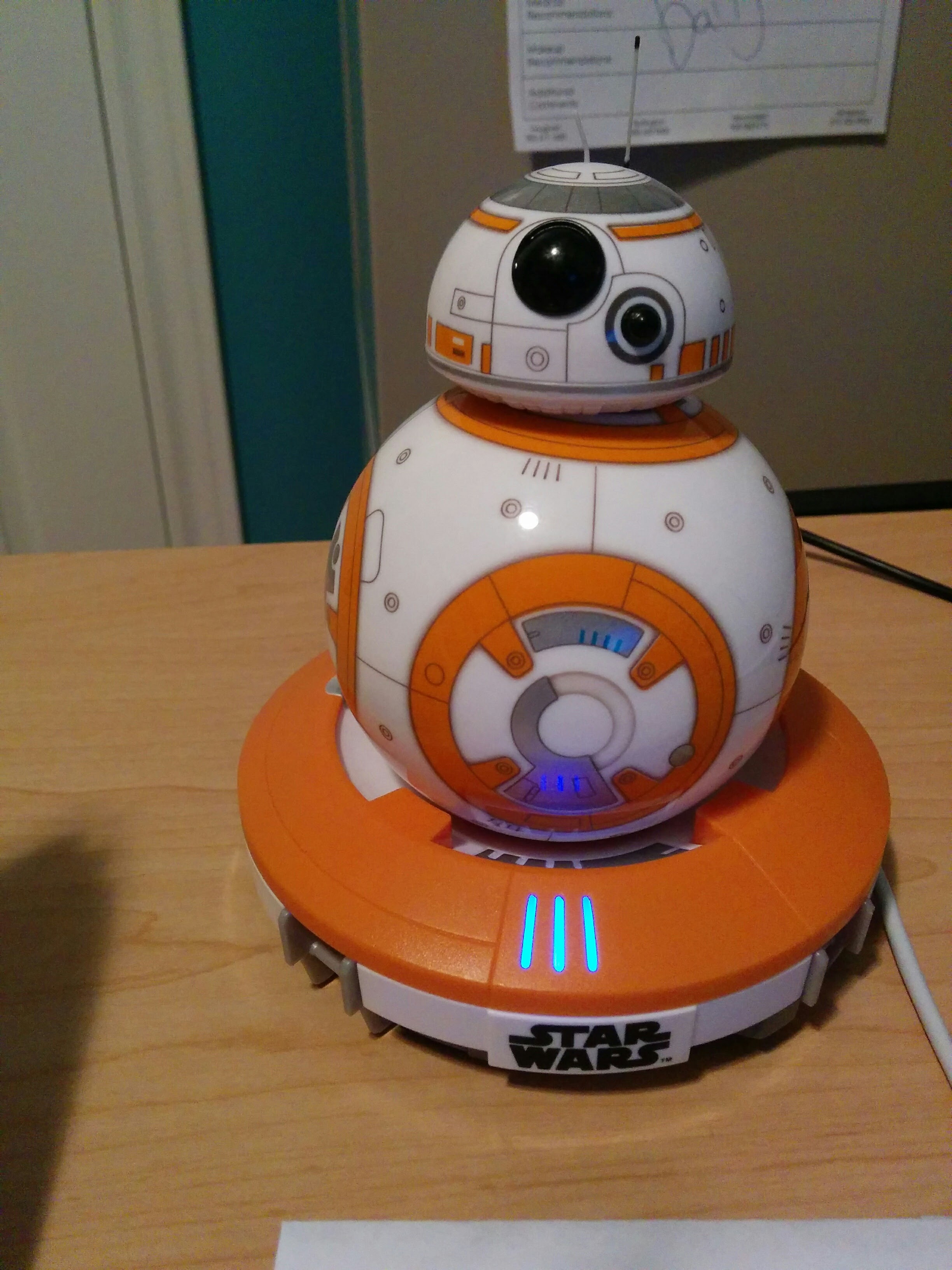 When not in use or when charging, the BB-8 sits on a matching inductive charging base that plugs into the wall. The charger works really well and gives the BB-8 a nice stand to be display on.

The BB-8 app is what adds a lot of the magic to the BB-8 droid. As mentioned above, it’s used as a way to control the BB-8 and it supplies sound. There are also several built-in extras that offer up a few more things to do with the toy.

There are three interactive modes in the app: Drive, Message, and Patrol. The Drive interface is the main mode that’s used, and consists of a virtual directional pad that can be moved to control the direction of BB-8. There’s also a virtual BB-8 on the screen, which is an orientation-based control method used to line up the blue light in the actual BB-8 with the user’s direction. BB-8 moves in the direction where the blue light is pointing, which keeps him on track even at high speeds. 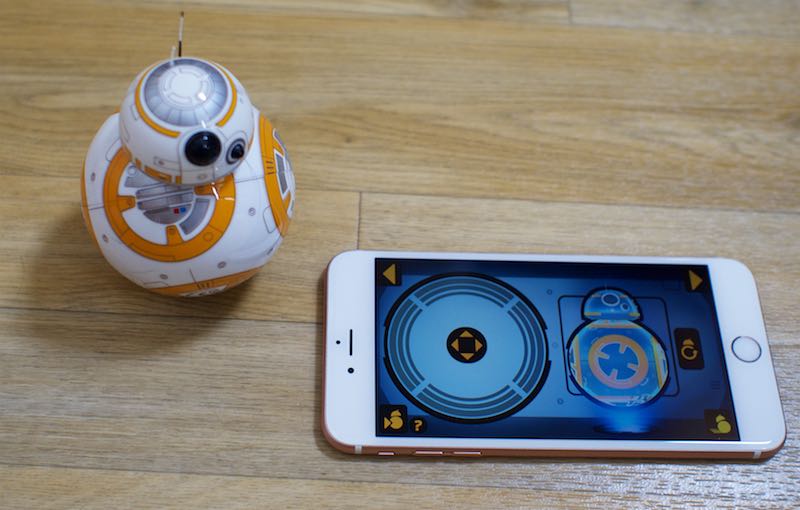 The dual control stick method works very well. BB-8 is responsive and the controls are accurate. After getting the hang of the controls, it was easy to get BB-8 to go where I wanted him to go. These controls are simple enough that even younger children should be able to use BB-8 without much trouble so long as the blue light is lined up.

On the Drive screen of the app, there are also controls for driving in reverse and temporarily boosting BB-8’s speed, and if the BB-8 portrait is tapped, there are several actions available. BB-8 can be made to nod yes or no, spin in circles joyfully, or do a perimeter check where he investigates the room. A second screen of actions includes two mini patrols, square and figure 8 shaped.

BB-8 worked well on even flooring, but it had difficulty going from a hard floor to a slightly elevated rug. BB-8 is not going to work as well in situations where the flooring is uneven.

Whenever I ran into an obstacle in the house, BB-8’s head had a tendency to pop off from the impact. This was frustrating because it happened frequently and required me to walk over and fix the head.

The Messages screen of the app lets you record a video message with the front-facing camera, which BB-8 “plays” holographically. This is done by holding up the iPhone to BB-8, with the message being played on the iPhone using augmented reality. Recording messages is also awkward because the BB-8 app can only be used in landscape mode and recording video in landscape mode with the selfie camera is just plain unwieldy. The front-facing camera is the only camera that can be used to record these messages.

A patrol feature makes up the third and final section of the app. In this mode, BB-8 will “explore” on his own, moving around the room and navigating obstacles without user input. In this mode, there are metrics that tell you how far BB-8 has patrolled, his speed, balance, acceleration (vector and mapping), internal temperature, and more.

When patrolling, the app will keep a map of where BB-8 has been and an event log, which includes proximity data, self diagnostics, and collision information, recorded whenever BB-8 bumps into anything. BB-8 saves some of this mapping information and he’ll get a bit smarter, running into fewer obstacles in the room as time goes on.

For example, if BB-8 runs into a table leg, he’ll mark the spot on the map as an obstacle and in the future, he won’t run into the same barriers. This is a process that involves a lot of movement around the room and plenty of vocalization, with BB-8 making angry noises whenever he runs into anything.

BB-8 includes voice recognition features, which can be turned on in the Settings section of the app. After going through the brief tutorial, BB-8 was responsive to voice commands. Saying “Okay, BB-8” activates voice mode, and from there, he’ll follow several other commands like “Run away!” or “Go explore,” both of which are movement commands. He’ll answer questions like “What do you think?” or “How do you feel?” with nods or head shaking, or react to statements like “Run away!” or “It’s a trap!” 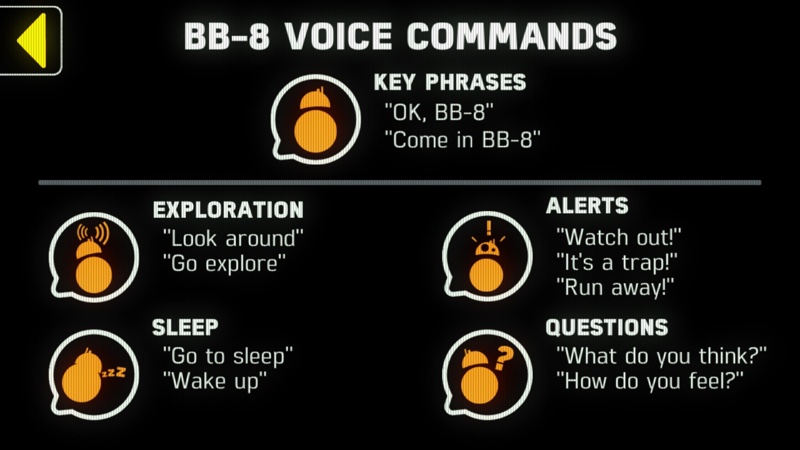 Voice commands worked most of the time and were another way to interact with BB-8, but what he does via voice is basically the same as what can be done in the Drive section of the app, and voice commands can’t be used while BB-8 is being manually controlled. It’s also easy to accidentally activate voice mode when it isn’t wanted, and voice commands weren’t always recognized.

Each time the BB-8 is used, the app needs to be re-paired with the droid. For pairing to take place, an iPhone needs to be held near the BB-8, and this constant need to re-pair is a hassle. You need to go through this pairing process even when exiting the app for just a moment to check a message or take a picture.

BB-8 is an undeniably cute toy, but as with some other Sphero products, I question how long it’s able to entertain.

BB-8’s controls are simple enough for kids to use and it’s fun to drive around the house. The main point of frustration may be the one thing that gives the BB-8 its charm, the head. The head comes off almost every time the BB-8 runs into an obstacle, requiring it to be picked up and put back. Of course, you can use BB-8 without his head, but that just feels wrong. 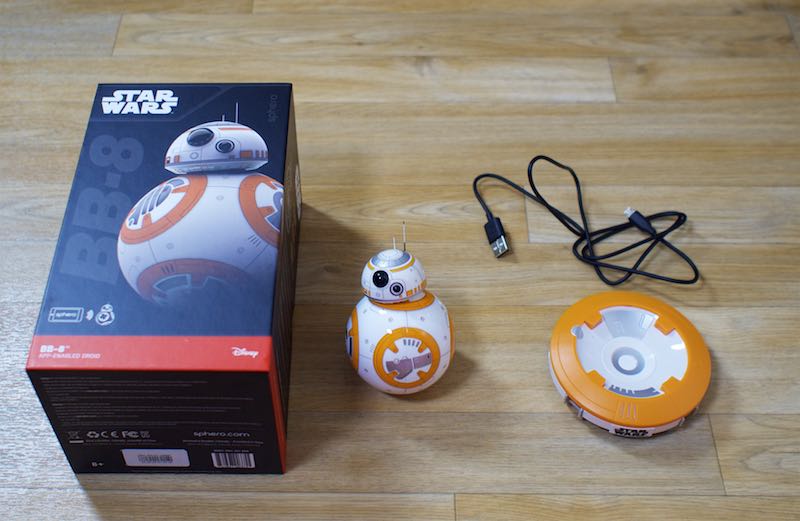 The BB-8 is without a doubt Sphero’s best toy yet, and if you don’t mind shelling out $149 on a robotic iPhone-controlled ball that might not have a lot of lasting potential beyond being a collector’s item, BB-8 is worth the cash.