Take Over The World With Civilization Revolution 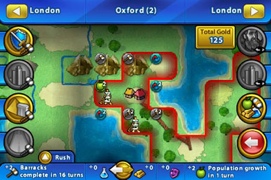 I find the board game Risk fun, but unrealistic. How can fighting be the only way to win a dispute? This is how Civilization Revolution became my favorite Risk game. It’s world domination, taken physically, or verbally.

While the computer is their flagship console, they have recently been licensing to other consoles, including iOS. As excited as I was to see the game available on my phone, I was rudely awakened by the terrible manor in which they’ve ported the game.

The game itself is really good. It takes a lot of the elements of the full game and appropriately scales them down for the small screen. The graphics are simple, the tech tree is diverse, and the game moves along quite well. 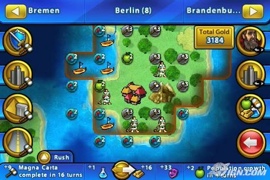 Although I’ve been complimenting the game itself, there’s one huge mistake that convinced me to stop playing. The lack of an instruction manual. No where in the game does it explain what the icons mean or exactly what managing your city does. There’s a whole path you can take to win the game that is completely shrouded in mystery and I’ve even looked online for the answer to my questions but couldn’t find an answer. If you manage to find out what they all mean, do tell.

My last comment on this title is the lack of advancements on their HD counterpart. While the iPhone version runs at $6.99, the HD version comes at $12.99 and offers you a mere larger revision. A shooter I can see being pricier on an iPad. Maybe a sports game. However a board game that isn’t necessarily optimized for a larger screen, charging six dollars extra is ridiculous. After purchasing the HD version, I requested a refund and am much happier running the iPhone version on my iPad, knowing I have six extra loonies in my account.

So, do you prefer to buy the HD version of applications? Or do you just run the iPhone version expanded?