Queen Elizabeth II recently celebrated her Diamond Jubilee, 60 years of ruling the throne and to celebrate the Government of Canada has launched the Crown in Canada iPhone app, as part of Diamond Jubileeweek. The Minister of Canadian Heritage and Official Languages, James Moore:

“Our Government supports commemorating important milestones in Canadian history, such as the Diamond Jubilee,” said Minister Moore. “Part of commemorating such a special anniversary involves trying to reach new audiences, including young Canadians. These new applications will provide an opportunity to encourage Canadian youth to participate in this celebration of our country’s traditions, history, and institutions, and encourage all Canadians to learn more about the role of the Crown in Canada.”

The official Crown in Canada app is here!

Get updates from the department of Canadian Heritage on the Crown and monarchy in Canada.

This app will be your main source for photo and video updates regarding the Crown. Check out what is being said on Twitter or RSVP for public events via the official Crown in Canada Facebook page. You can also send postcards to Her Majesty and access the calendar or events related to Royalty.

Itineraries will also be included within the app so you are always up-to-date on where the members of the Royal Family are during their stay in Canada. 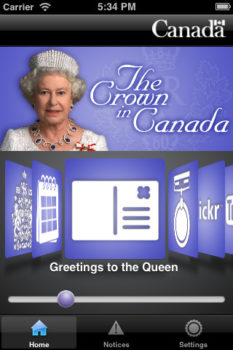 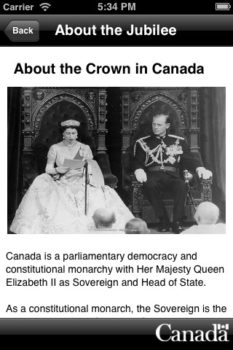 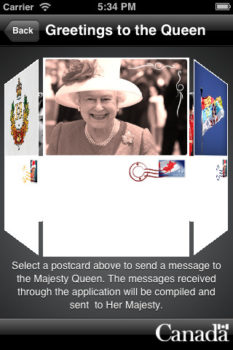 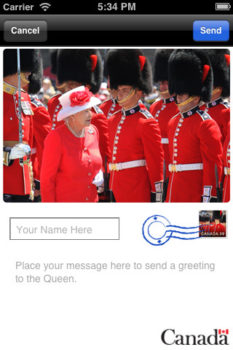 This app allows you to send a postcard greeting to the Queen to help celebrate her Diamond Jubilee, plus has other information such as calendar events and itineraries of visits by the Royal Family to Canada.