If you’re a profesional wrestling fan, tonight the WWE presents its biggest PPV of the year – WrestleMania 28. So what better time for April’s Time Waster of the Month – WrestleFest for your iOS devices.

This is a port over of the hugely popular arcade game WrestleFest back in the early 90’s. 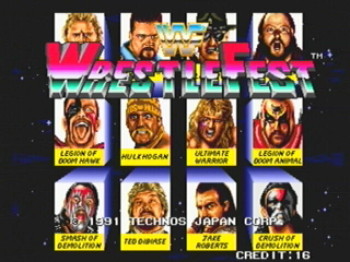 Of course being 2012 there are more than a few changes to this one. The biggest, the roster of characters you play as. Gone are Hulk Hogan, the Ultimate Warrior and Mr. Perfect. Now you get the likes of the Undertaker, Triple H, and the Rock.

Other changes include more gameplay modes such as Road to Wrestlemania where you compete to win all the WWE’s championships and the Gauntlet match where you try to win as many matches in a row. Of course you still have from the original a tag team tournament and the Royal Rumble. 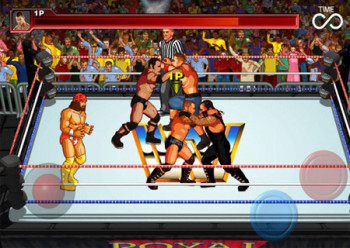 There are of course some changes to the gameplay as well. Have a watch of my video review to see the game in action and some of the changes in this game.

So in closing, if you’ve played the original arcade classic and are hoping for a true port to the iOS devices, you’ll be disappointed. The overall feel and look stay the same, but it’s not quite the same.

The game costs $2.99 for the iPhone and the iPod Touch. It’s $3.99 for your iPad. This too is a disappointment because not only do you have to buy it twice if you want it on both devices, you will have to re-buy the character expansion packs for each device. While they only cost $0.99 each, it is frustrating.

If you’ve played both the arcade version and the iOS version let me know what you think? Is the update and changes good or has it taken away from the original?